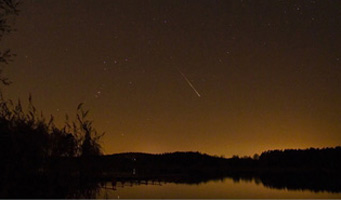 Although most of North America was clouded out, the view from Vallentuna, Sweden, didn't disappoint.

The Leonid meteor shower produced a brief increase in activity this past weekend, with observers reporting a few bright meteors on the evening of November 19th.

Meteorologist Joe Rao of New York reports "Though my location was overcast, listening to NASA's forward scatter meteor radar, I noted an increase of activity around 4:55 Universal time, roughly ten minutes later than the predictions."

Though much of the eastern United States was overcast, reports from Spain indicate a short peak did take place around the predicted time, with 3 to 4 meteors observed per minute between 4:45 and 5:00 UT. This year's passage coincided with the trail of debris left in the wake of comet 55P/Tempel-Tuttle's 1933 pass, and was expected to be dominated by small, dust-sized fragments.

Observers anxious for a good meteor display haven't long to wait. The Geminid meteor shower is expected to peak on the evening of December 13th. In the meantime, share your images of the Leonids in our online gallery.