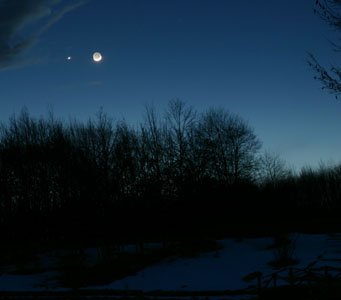 On February 19, 2007, TunÃ§ Tezel captured Venus and the Moon setting over a small lake in Turkey. This is a crop of a larger image; click above for the original.

On the evening of Thursday, April 19th, the Moon will pass less than a hand's width from Venus, with the Hyades and Pleiades as a backdrop.

Conjunctions of the Moon and the brightest planet can be appreciated on many levels. Because Venus never strays far from the Sun, they're best seen in the twilight glow of sunrise or sunset, which are magnificent in their own right. The full Moon would overwhelm Venus if the two could ever appear side by side, but in fact the Moon is always in a thin crescent phase during these events, reducing its brightness so that it's comparable to Venus's. On April 19th, the Moon will still outshine Venus by a factor of 15, but because the Moon's light is spread out over a bigger area, dazzling Venus may actually seem brighter. Tell us what you think and please send us your photos!

If you're viewing with your unaided eyes, note how the appearance of these two object changes as the sky grows darker, evolving from gentle highlights in the glow of sunset to brilliant beacons once the sky is fully dark. And make sure you note the earthshine, poetically known as "the new Moon in the old Moon's arms." 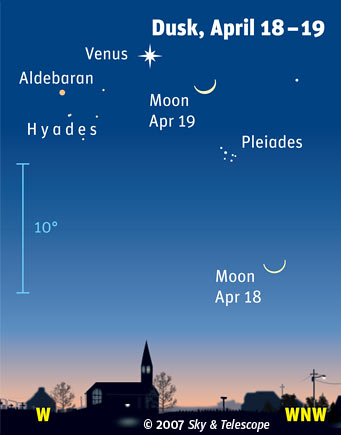 Don't miss the Moon aligning with Venus and the starry array in the western twilight. (These scenes are drawn for the middle of North America. European observers: move each Moon symbol a quarter of the way toward the one for the previous date. The blue 10° scale is about the size of your fist held at arm's length. For clarity, the Moon is shown three times actual size.)

Binoculars will greatly enhance the views of the earthshine. See how many features you can identify both on the bright sunlit lunar crescent and on the part of the Moon that's lit only by the glow of our own planet. The night sky's two brightest objects will barely fit together in a binocular field of view for observers on America's East Coast, but by the time the sky gets dark on the West Coast, the Moon will have moved within a few degrees of Venus.

A telescope will show even more detail on the Moon, and if you look closely, you should also see that Venus is clearly off-round, in a 63% gibbous phase. Venus is best observed as soon as you catch sight of it, while it's still high above the horizon, and the glow of the surrounding sky reduces Venus's otherwise overwhelming glare to manageable levels.

For a real challenge, see if you can catch sight of the pair during broad daylight. From late afternoon to sunset, they'll be roughly 15° left of the Sun and 35° above it for observers at mid-northern latitudes. You're most likely to succeed if you stand just inside a building's shadow, so that you can tell exactly where the Sun is without being blinded by its glare.

If you miss this conjunction, the Moon and Venus will still make a magnificent pair on Friday evening, April 20th. And they'll be really close together at their next conjunction, on May 19th. 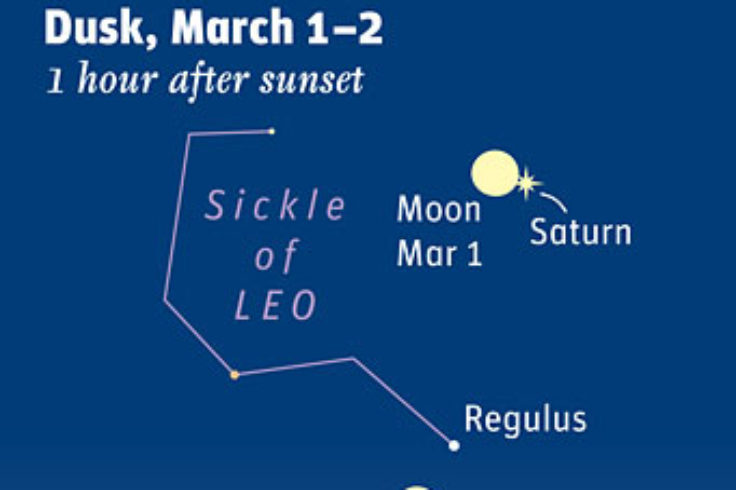