Mercury is a paradoxical planet. At its brightest, it outshines any star in the sky, yet few people have knowingly seen it. It's one of the closest planets to Earth, but we know far less about it than about any other solar-system body of comparable size.

Mercury never strays very far in the sky from the Sun, so at best, it's visible low in the sky for an hour or two before sunrise or after sunset. Most people prefer to view in the evening, and 2007 gives Northern-Hemisphere observers two good chances to do so: the first half of February, and between mid-May and early June. (The best pre-dawn apparition will occur in November.) 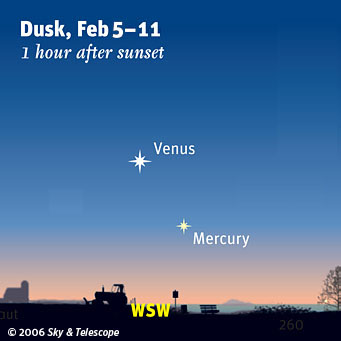 Mercury is highest in the evening sky, changing very little in position, from February 5–11. After that, it sinks rapidly toward the horizon each successive evening. Although this apparition isn't as favorable as the one in May and June, Mercury is very easy to spot this time around because it happens to be quite close to dazzling Venus.

To locate Mercury, find a spot with an unobstructed western horizon and go there about a half hour after sunset. By that time, Venus should be easy to locate in the west-southwest. Mercury shines below and to the right of Venus. The separation between the two planets increases from 6° on February 5th to 9° on the 11th — a little less than the width of your fist held at arm's length. You may need binoculars to see Mercury at first, but it should soon be obvious to the unaided eye. Pat yourself on the back, because probably not one person in a hundred — including many amateur astronomers — has knowingly set eyes on this planet.

For added enjoyment, view Venus and Mercury through a telescope.
Both planets' disks are quite small, so you'll need a magnification of 50–100x to see them clearly. Venus is nearly full (90% illuminated) so it will look like a tiny disk, possibly with one edge flatter than the other. But if you can get a good view of Mercury, it should be obviously non-circular, as it phase decreases from 60% illuminated on February 5th to 30% on the 11th.

The key to good telescopic views is to catch the planets as soon as possible — ideally immediately after sunset, while they're still fairly high in a bright sky. This reduces the amount of air you'll have to look through, and the skyglow also renders the planets' glare less obtrusive.

Mercury gets rapidly fainter and lower every evening after February 11th, making it a less attractive target to the unaided eye. But this may also be the most rewarding time for telescopic observing, as the planet swells from 7" on the 5th to 9" on the 11th to nearly 16" on February 16th, while simultaneously becoming an ever thinner crescent. If you've succeeded in locating Mercury before the 11th, it should be relatively easy (weather permitting) to follow it down toward the horizon for several evenings after that.

While you're observing Mercury, bear in mind that our knowledge of this orb may soon increase tremendously. Most of what we now know about the innermost planet comes from three flybys by Mariner 10 in 1974 and 1975. But if all goes according to plan, the Messenger spacecraft, launched in August 2004, will fly past Mercury three times starting in January 2008 and start orbiting the planet in March 2011. See Messenger's home page for more information