What does the sky look like through a 36-inch telescope? I found out at Ohio's Hidden Hollow Star Party last week. Here's my report and a few observing targets to share.

I spent last weekend 50 miles north of Columbus, Ohio, as a guest of the Richland Astronomical Society at the club's annual Hidden Hollow Star Party. There I met a lot of smart, fun, and warm-hearted people who treated me like a king. What a great bunch, and I'm grateful for all the new friendships made.

The club owns and operates the Warren Rupp Observatory, situated on a small hill in the middle of a cozy oak forest, which houses a splendid 36-inch f/6.8 reflecting telescope nicknamed "Big Blue." The massive instrument towers over guests of the classic, domed observatory.

Both nights, the air thrummed with the buzz and scratch of countless crickets and katydids. Although a few clouds floated by and the lights of several nearby cities bloomed here and there along the horizon, the Milky Way from Cassiopeia through Aquila was plainly visible, and I could easily make out the Double Cluster and Andromeda Galaxy with the naked eye. This surprised me because nighttime satellite photos show this part of the country awash in light pollution. Now I know to take those photos with a small grain of salt. There are pockets of darkness, and this is one of them.

The telescope functions best when pointed at objects in the upper half of the sky, placing the eyepiece nearly 25 feet high. A ladder would make reaching it a great chore especially for older people and young children, so the staff arrived at an ingenious solution: a mobile scissors lift. Visitors climb three, red-light-illuminated steps to a caged platform, then the telescope operator elevates them to the eyepiece. Amateur astronomer Bruce Scodova did most of the lifting Friday and Saturday nights, deftly positioning each observer's eye precisely at eyepiece level. He made it seem easy, but all those nights of public outreach, not to mention tracking down 10,000-plus galaxies with Big Blue, had earned him a very particular, Liam Neeson-like set of skills.

Before I tell you what we looked at, let's take a minute to sing the praises of old-style domes with their delicious smells and sounds. Stepping in from the outside, the nose detects a delicate bouquet of grease, metal, and musk, a positively 19th-century aroma that would put smiles on the faces of E. E. Barnard and Percival Lowell if they could walk among the living again. Red lights glow along the wall, silhouetting the tall tube and massive mount. Your trip to the eyepiece is accompanied by the whine of the lift, while the ride itself is thrilling. It felt as through we rode an elevator to the stars.

Nothing beats the creak and rumble of the dome as the slit is repositioned to face a new target, followed by the strange, pitch-shifting whines as motors are engaged to lock onto a target. One amateur said they sounded like the calls of humpback whales. All of this gets you ready for why you came — to put eye to eyepiece and soak up distant photons that have been chasing your way for centuries.

We looked at the globular cluster M15, an enormous ball of more than 100,000 stars in the constellation Pegasus. Globulars are often so crowded in their centers, it's hard to pick out individual stars. Not a problem in the 36-inch. The cluster filled nearly the entire field of view at 360× with stars everywhere including the center, where they gathered in small, dense clumps. We also saw Pease 1, the first planetary nebula discovered in a globular cluster. It was easily visible with direct vision as a tiny, slightly fuzzy "star." An OIII filter fattened it up and made it pop!

We looked at the biggish, pale blue disk of Uranus and its two brightest moons, Titania and Oberon. The 14th-magnitude supernova 2017 glq in the galaxy IC 208 positively blazed. Club member Terry McQuistion was blown away when he first saw it, remarking that the exploding star appeared brighter than the entire galaxy. M27, the Dumbbell Nebula, a summer and fall favorite, barely resembled its namesake in the giant scope.

With an O III nebular filter, the nebula was transformed into a field-filling oval with two giant "owl eyes" on either side of the traditional dumbbell shape. Streaks of gas extended off the nebula's western edge. If you didn't know you were looking at the Dumbbell, you wouldn't have recognized it.

The constellation Triangulum hosts one of the closest galaxies to the Milky Way, the Pinwheel (M33) located 2.7 million light-years away. It filled the entire field of view with patchy spiral arms, chunky star associations, star clusters and large nebulae. The nebulae lit up even brighter with the filter. Most amazing was the galaxy's largest and brightest emission nebula, the star-forming region named NGC 604.

Using higher magnification and the filter, we could see at least five stars shining at about magnitude 16 (massive, hot stars that illuminate the object), the nebula's irregular shape, and hints of texture. Because the galaxy spilled outside the field of view, Bruce told us to grab the two handles attached to the tube and push the scope around to explore neighboring fields. Hands-on across the galaxy! As I shimmied the monster scope about, I felt like the pilot of a manual transmission spaceship.

We moved on to the intensely blue Saturn Nebula (NGC 7009). Two bright, inner shells enclosed the central star, which struggled to "break through" the dense nebulosity filling the central region. A large, diffuse outer envelope enclosed the whole works with two brighter knots of nebulosity at either end of the ansae. I also got a look at the Ring Nebula (M57) — it was the first time I could pretty much just stare at the central star instead of playing a game of hide-and-seek.

You might think a large telescope makes all your favorite bright Messier and NGC objects much brighter, but that wasn't my impression. I mean, yes, it does make everything brighter, but not to the degree you might think. M33 still looked misty and soft, galaxies gray and fuzzy, and the Ring Nebula resembled what I routinely see in my 15-inch, except for the central star. Large scopes make it possible to see much fainter things within these bright objects as well as resolve smaller details — like having a much finer dissecting tool.

Little did I know that after going to bed at 2:15 Saturday morning I'd be woken up at 5 a.m. with three, short, hard raps on the motor home door. It was club member Jason Wallace there to announce that the big scope was pointed at the Orion Nebula if I'd like a look. Good lord, I was tired. No way I was getting up. But I did anyway. How does any observer pass up the call from Orion? I literally stumbled out of bed, having been on my feet for many hours that night, put on a coat and headed for the dome.

OMG, wow! The inner bright stars, called the Trapezium, that excite the nebula's gases to shine, glared in the center of a nest of nebulosity, part of which glowed subtly blood-red. Normally, four Trapezium stars are visible in small telescopes and six on a good night in 6-inch or larger scopes. We saw six no problem and two additional very faint pinpoints I'd never noticed before very close by to the northwest. Other faint stars sparked through the nebula to stunning effect.

The closest analog to looking at the Sun through a telescope is Sirius. Few amateurs looking for deep-sky objects will risk destroying their night vision by pointing a telescope at the brightest stars in the night sky. But we do it anyway because right next to it, buried in glare, is Sirius-B, the Pup Star, the most famous white dwarf in the sky. When Bruce locked onto Sirius after the Orion Nebula, I was stunned by the steadiness of the seeing conditions. The star, as intensely bright as the glare of sunlight on metal, sat absolutely steady in the field of view. We easily found the Pup, a tiny glimmer nearly astride one of the telescope's diffraction spikes.

After exploring the skies like modern day Lewises and Clarks that weekend, I'm rich in interstellar photons and happy to report that you can look through Big Blue, too. Public observing nights are held on the first Saturday of each month March through November. Drop by the club's website and make plans for your cosmic journey.

Glad that you had a great night at the Warren Rupp Observatory. I wish we had skies like that at Wagman Observatory, but the light pollution has worsened over the 30 plus years since its opening. I observed the SN in IC 208 last week. It was much easier to spot than the galaxy, which took a few minutes more to confirm. Five nights ago I was able to locate the SN in NGC 2748, 2017gkk. I estimated it at 14.7 mag. It was the 10th SN that I've observed this year. It's been a very good year for SNs, at least the best for me. It's also number 99 since observing the SN in M100 in 1979 discovered by fellow AAAP member, Gus Johnson. I've observed all six of the stars in the Trapezium on good nights at Wagman through the 21" Newtonian. There are several other nebulae in M33 besides NGC 604 that are observable with moderate to large reflectors, though it is the easiest one to see. I often spot it in the scope before I see the nucleus of the galaxy. I hope to get some observing in after Moonset tonight. Hope you have a good one as well.

Hi Tom,
Both of those are great, relatively easy supernovae. Congratulations on your supernovae observations -- I bet you're excited for #100.

I really enjoyed Bob King's presentation. Great info and I wish I had my camera handy for a shot at the "exposure" settings slide! The folks at HH put on a superb star party. I am now spoiled with their dark sky site. If I lived closer I would be a member in a heartbeat! My only regret is not taking the time to look thru "Big Blue" while I was there. Next star party!!

Thank you, Jim! I hope you'll have an opportunity to look through the scope at the next public night when the moon's out of the sky. 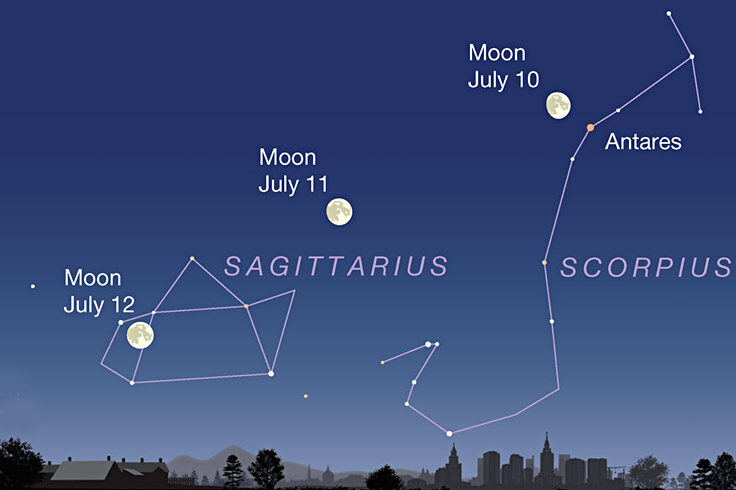