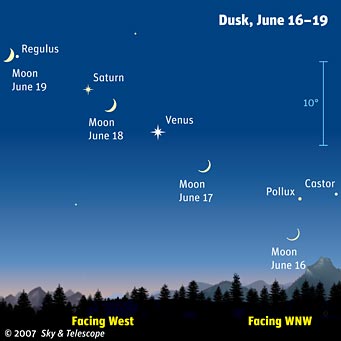 Watch the Moon wax its way up past Venus, Saturn, and Regulus in nightly succession. (These scenes are drawn for the middle of North America. European observers: move each Moon symbol a quarter of the way toward the one for the previous date. The blue 10° scale is about the size of your fist held at arm's length. For clarity, the Moon is shown three times actual size.)

Jupiter (magnitude –2.5, in southern Ophiuchus) was at opposition on June 5th. It glares in the southeast at dusk and dominates the south by 11 or midnight daylight saving time. Antares, less bright, sparkles 6° to Jupiter's lower right. The two will be evening companions all summer.

Saturn (magnitude +0.6, in Leo) is in the west during evening, closing in on dazzling Venus from the upper left. The gap between the two shrinks from 11° to just 5° this week. Venus and Saturn are on their way to a close conjunction at the end of June.

Regulus, less bright at magnitude +1.4, is 8° or 9° to Saturn's upper left. And look north (upper right) of Regulus by 8° for the 2nd-magnitude star Algieba (Gamma Leonis), a fine telescopic double star.

Pluto (magnitude 13.9, in the northwestern corner of Sagittarius) is not far from Jupiter in the south late at night. Finder charts for Uranus, Neptune, and Pluto are in the July Sky & Telescope, page 60.