Some daily events in the changing sky for October 26 – November 3. 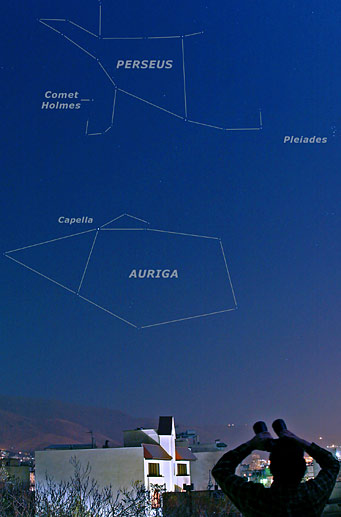 On the evening of October 24th, through bright moonlight and light pollution over Tehran, Iran, Babak Tafreshi took this wide-field panorama. "This is unbelievable!" he writes. "I was amazed to find Comet Holmes so easily with the naked eye in the light-polluted skies." Click image for full view.

Naked-eye Outburst of Comet Holmes. On Wednesday October 24th, faint little Periodic Comet Holmes (17P) underwent a gigantic outburst to shine as bright as magnitude 2.5, easily visible to the unaided eye. That day the ejection of gas and dust was still so close to the comet's nucleus as to appear starlike, as if this were a nova. Within the next day the cloud was beginning to enlarge visibly, at least in telescopes.

Comet Holmes is in Perseus, excellently placed high in the northeast in late evening. This is an extraordinary event not to be missed! Full story.

Mercury is only about magnitude +1 when it emerges into view late this week, very low in the glow of sunrise. Using binoculars, look for it about 30 minutes before sunrise just above the east horizon, very far lower left of bright Venus. Spica glimmers a little to Mercury's right or upper right. On what date will you see them first?

To find your local sunrise time (and much else), make sure you've put your location into our online almanac. If you are on daylight saving time, make sure the Daylight Saving Time box is checked.

Venus (magnitude –4.5, in eastern Leo) blazes high in the east before and during dawn. Well above it now, and a bit right, are much fainter Saturn and (even higher) Regulus. A telescope shows that Venus is reaching dichotomy, its half-lit phase.

Mars (magnitude –0.6, in Gemini) now rises as early as 9:30 p.m. daylight saving time. It shines very high toward the south before dawn — near the zenith, in fact, for mid-northern observers.

In a telescope, Mars appears 12 arcseconds in diameter. It will reach 15.9" diameter around its Christmas-season opposition. The Martian dust storms of July and August have abated, and while the planet's atmosphere is still bright and hazy with dust, surface features are showing through better. But they're still low-contrast.

Jupiter (magnitude –1.9, in southern Ophiuchus) is sinking low in the southwest in twilight. It sets soon after dark.

Saturn (magnitude +0.8) is the brightest "star" above brilliant Venus in the dawn. Fainter Regulus (magnitude +1.4) is there too, upper right of Saturn.

Pluto (magnitude 14.0 in Sagittarius, above Jupiter) is disappearing into the sunset.

All descriptions that relate to your horizon or zenith — including the words up, down, right, and left — are written for the world's midnorthern latitudes. Descriptions that also depend on longitude (mainly Moon positions) are for North America. Eastern Daylight Time (EDT) equals Universal Time (UT, UTC, or GMT) minus 4 hours.