Some daily events in the changing sky for November 23 – December 1. 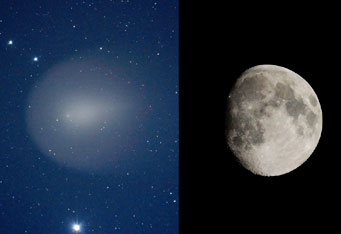 On the evening of November 21st the dimming head of Comet Holmes was about 0.6° wide, just a bit larger than the Moon — as shown in this pair of images that Gary Seronik shot at the same scale. Click image for larger view.

Comet Holmes is fading and tough to spot with the naked eye, as it continues to enlarge and lose surface brightness. But binoculars still give a good view — and a moonless window of dark sky begins to open up after the end of twilight starting on Monday the 26th. The comet is now moving away from 2nd-magnitude Alpha Persei (Mirfak), which is at the bottom of the photo here. See our finder chart, full story, and reader photos.

Mars, shining brightly at magnitude –1.2 in the middle of Gemini, now rises as early as 7 p.m. and is up in fine view by 10. It shines very high in the early-morning hours — passing near the zenith, in fact, for mid-northern observers (around 2 or 3 a.m.).

In a telescope Mars now appears 14.5 to 15 arcseconds in diameter, nearly as wide as the 15.9" it will display around its Christmas-season opposition. For all about observing Mars with a telescope this season, see the guide and surface-feature map in the November Sky & Telescope, page 66.

Jupiter (magnitude –1.8) is disappearing into the sunset, just above the southwest horizon in twilight.

Saturn (magnitude +0.7) rises around midnight and is very high in the south before and during dawn. Fainter Regulus (magnitude +1.4) is 8° to Saturn's upper right after they rise, and directly right of it as they fade out in the light of dawn.

Uranus (magnitude 5.8, in Aquarius) is well placed in the south right after dark, high above Fomalhaut.

Neptune (magnitude 7.9, in Capricornus) is getting lower in the south-southwest. Finder charts for Uranus and Neptune are in the July Sky & Telescope, page 60, and online.