Some daily events in the changing sky for February 26 – March 6. 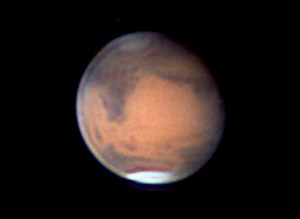 Mars is gibbous now; it's more than a month past opposition. The north polar cap (bottom) remains big and bright despite the advance of spring in the Martian northern hemisphere. At center-left is dark Syrtis Major; at upper right are dark Sinus Sabaeus and Sinus Meridiani. At top, the Hellas region is slightly bright.

Christopher Go in the Philippines took this image at 14:00 UT March 3rd, when the central meridian longitude was 321Â°. Stacked-video imagery like this can show detail on a planet much more clearly than the eye can see through the same telescope.

Venus (magnitude –3.9) is slowly emerging into view very low in the sunset. Look for it just above the western horizon about 30 minutes after sundown. Binoculars help. Venus will gradually creep up into better twilight visibility for the next threre months.

Mars, still bright at magnitude –0.6, shines high in the east at dusk and highest in the south around 9 or 10 p.m. It's located in Cancer, below Pollux and Castor after dusk.

In a telescope Mars is shrinking: from 12.4 to 11.6 arcseconds wide this week. Its north polar cap remains the most visible marking. Identify other surface features you detect in your scope using the Mars map and observing guide in the December issue of Sky & Telescope, page 57.

Jupiter is out of sight in conjunction with the Sun. 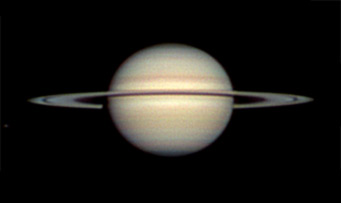 "Here's my first image of Saturn this season," writes Christopher Go from the Philippines. "The South Equatorial Belt [above center] is very dark. The color of both hemispheres are almost the same but the north is slightly darker. Lots of belt details on both hemispheres. The North Polar Region is dark." South is up; we'll be looking at the north face of the rings for the next 15 years.

Go images the planets with a Celestron 11 scope on an AP900GTO mount using a DMK 21F04 camera. Stacked-video images like this show more detail than the eye can see even through the same telescope.

Saturn (magnitude +0.6, in western Virgo) rises in the east around the end of twilight and stands highest in the south around 1 a.m. In a telescope, Saturn's rings are tilted only 4° from edge-on to us, as seen at right. They'll narrow further (to 1.7°) in the coming months.

Pluto is up in the southeast before dawn.

The Closest Whiz-by of Toutatis