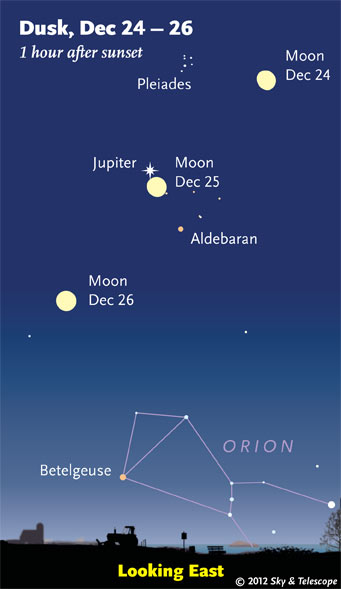 As the Moon nears full, it lands between Jupiter and Aldebaran on Christmas evening for the longitudes of the Americas. European observers: move each Moon symbol a quarter of the way toward the one for the previous date. The Moon is shown three times actual size. 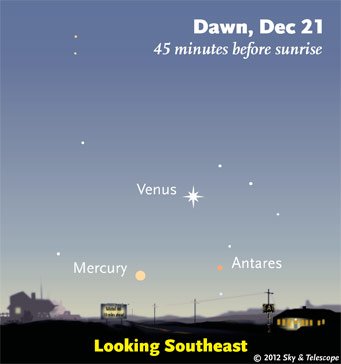 All week at dawn, Mercury shines down to the lower left of bright Venus. By December 21st, try also for Antares, as shown here. Binoculars help. 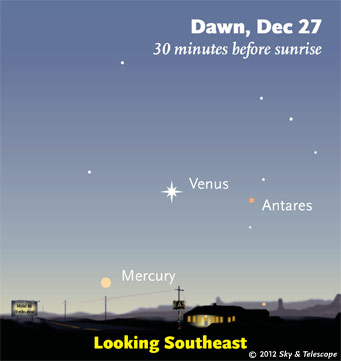 This week Venus gradually sinks lower in the dawn, Mercury below it sinks a little faster, and sparkly Antares climbs higher — beginning an apparition that will bring it into the evening sky next summer.

Mercury (magnitude –0.5) can be spotted during dawn, well to the lower left of brilliant Venus low in the southeast. They're 8° or 9° apart.

Venus (magnitude –3.9) is still the bright "Morning Star," but it's moving lower in the dawn every week. Look southeast.

Mars (magnitude +1.2) still remains low in the southwest in evening twilight. In a telescope it's just a tiny blob 4.3 arcseconds in diameter — hardly larger than Uranus!

Jupiter (magnitude –2.8, in Taurus) is up and glaring in the east as twilight fades. It climbs to dominate the high eastern and southeastern sky in the evening, with orange Aldebaran 5° below it and the Pleiades twice as far to its upper right. Jupiter is highest in the south around 10 p.m. local time. In a telescope it's still a big 47 arcseconds wide.

Saturn (magnitude +0.7, in Libra) rises in the east-southeast around 3 a.m. local time. By the beginning of dawn it's fairly high in the southeast, far upper right of Venus. That's the best time to get your telescope on it. Saturn's rings are now tilted 19° to our line of sight, the widest open they've been in seven years.

Uranus (magnitude 5.8, in Pisces) and Neptune (7.9, in Aquarius) are the south and southwest, respectively, right after dark. Finder charts for Uranus and Neptune. 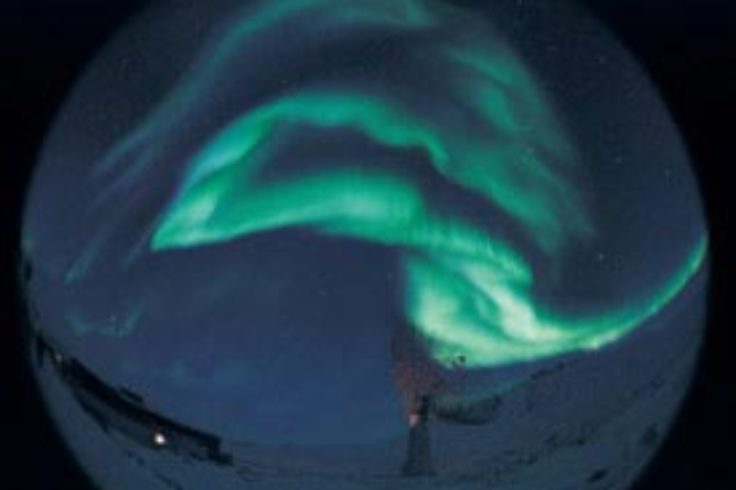