Some daily events in the changing sky for June 1 – 9. 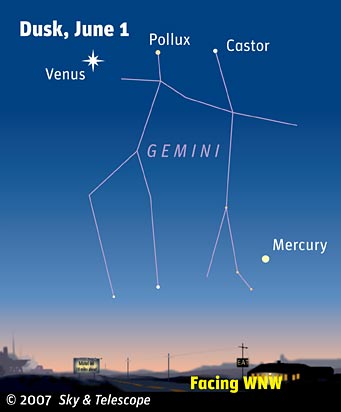 The two innermost planets still shine after sunset, though Mercury is fading now. Watch both move rapidly from day to day.

Mercury (in the feet of Gemini) remains relatively high in evening twilight, but it's fading — from magnitude +0.4 on June 1st to +1.2 on June 9th. Look for it far to the lower right of Venus, as shown at the top of this page.

Venus (magnitude –4.4, crossing from Gemini into Cancer) is the brilliant "Evening Star" in the west during and after twilight. After standing high in twilight all spring, Venus is getting a little lower again. Pollux and Castor, much fainter, are lined up to its right early in the week. They slide away to the lower right thereafter. A telescope shows that Venus is now half-lit.

Mars (magnitude +0.8, in Pisces) is gradually getting higher in the east before and during dawn. It's the orange-yellow dot below the Great Square of Pegasus. In a telescope, Mars is still a minuscule 6 arcseconds wide. 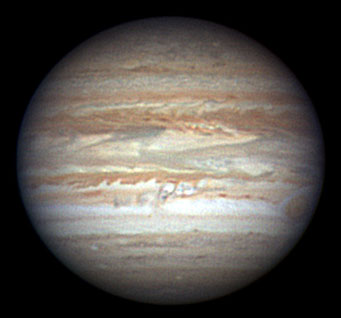 A weird outbreak has just erupted in Jupiter's South Equatorial Belt. It's on the central meridian just below center in this image taken by master planetary photographer Christopher Go on June 1, 2007, at 14:55 Universal Time. The almost vertical little dark wisps are quite un-Jupiterlike. Elsewhere, the Great Red Spot is just about to rotate out of sight around the planet's right-hand limb (celestial west; following). The white Red Spot Hollow around it helps make it more distinct in a telescope this season than it has been for years. North is up.

Jupiter (magnitude –2.6, in southern Ophiuchus) is at opposition on June 5th. It glares low in the east-southeast at dusk and dominates the south by 1 a.m. daylight saving time. Antares, less bright, sparkles 7° to its right in early evening, and to its lower right later.

Saturn (magnitude +0.5, in Leo) shines in the west during evening, upper left of dazzling Venus (by 23° to 16° this week). Watch these two closing in on each other, heading for a close conjunction at the end of June.

Regulus, less bright at magnitude +1.4, is 10° to Saturn's upper left. And look north (upper right) of Regulus by 8° for the 2nd-magnitude star Algieba (Gamma Leonis), a fine telescopic binary.

Uranus (magnitude 6, in Aquarius) and Neptune (magnitude 8, in Capricornus) are well up in the east-southeast before the first light of dawn.

Pluto (magnitude 14, in northwestern Sagittarius) is not far from Jupiter in the south late at night. Finder charts for Uranus, Neptune, and Pluto are in the July Sky & Telescope, page 60.