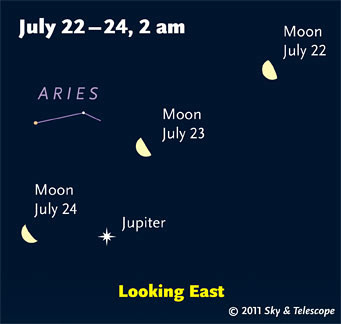 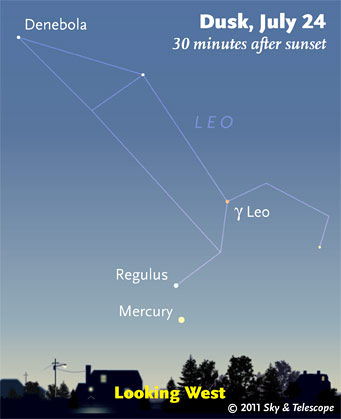 This week, use binoculars to watch Regulus pass fading Mercury after sunset. Their visibility in the bright twilight a half hour after sundown is exaggerated here.

Mercury fades from magnitude +0.4 to +1.0 this week as it sinks even lower toward the sunset horizon. Use binoculars to look for it very low in the west-northwest in bright twilight — and to spot twinkly Regulus, slightly fainter, nearby. Mercury and Regulus pass 3° from each other on July 26th.

Venus is hidden in the sunrise.

Mars (magnitude +1.4, near the horns of Taurus) can be found in the east-northeast as dawn begins to brighten. Look for it very far to the lower left of brilliant Jupiter. Don't confuse Mars with Aldebaran to its upper right. Upper left of Mars is brighter Capella.

In a telescope Mars is just a tiny blob only 4.4 arcseconds in diameter. It's on its way to a poor opposition (13.9 arcseconds wide) next March.

Jupiter (magnitude –2.4, in southern Aries) rises in the east around midnight daylight saving time. Once it's well up, look below it for the head of Cetus, rather dim. By dawn Jupiter shines high in the southeast.

Saturn (magnitude +0.9, in Virgo) is sinking ever lower in the west-southwest at dusk. Shining 13° left of it is similar, but bluer, Spica. About 1½° to 2° to Saturn's right is fainter Porrima (Gamma Virginis).

Pluto (magnitude 14.0, in northern Sagittarius) is highest in the south around 11 p.m. A big finder chart for it is in the July Sky & Telescope, page 64.