Some daily events in the changing sky for September 28 – October 6. 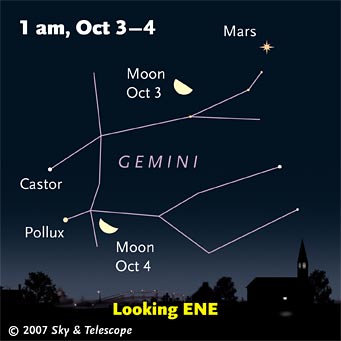 Mars shines in the feet of Gemini late in the night this week. (These scenes are drawn for the middle of North America. European observers: move each Moon symbol a quarter of the way toward the one for the previous date. For clarity, the Moon is shown three times actual size.) 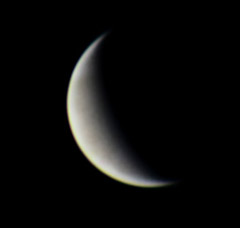 Mercury (magnitude 0) is deep in the glow of sunset, in the midst of a poor apparition for the Northern Hemisphere. And it's starting to fade. Try looking for it with binoculars about 20 minutes after sundown just above the west-southwest horizon.

Venus (magnitude –4.7, in Leo) blazes high in the east before and during dawn. Watch Venus closing in day by day on Regulus and Saturn, which are to its lower left.

A telescope shows that Venus is a crescent, thickening from week to week even as it shrinks into the distance.

Mars (magnitude –0.1, moving from Taurus into Gemini) rises around 10:30 p.m. daylight saving time and shines very high in the south at dawn. Compare its fiery color with those of fainter Aldebaran (high to its upper right late at night) and Betelgeuse (less far to Mars's right or lower right). 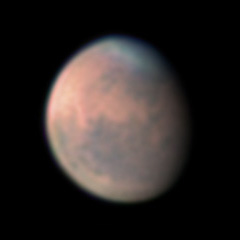 Mars was just shy of 10 arcseconds when this picure was taken at 7:20 Universal Time on September 30th. Mare Erythraeum dominates this hemisphere across the south, with the three "fingers" of Aurorae Sinus stretch left of the center.

In a telescope, Mars appears gibbous and 9.5 to 10 arcseconds in diameter. It will reach 16" diameter around its Christmas-season opposition. The Martian dust storms of July and August have abated, and while the planet's atmosphere is still bright and hazy with dust, surface features are showing through somewhat better. But they're still low-contrast.

Jupiter (magnitude –2.0, in southern Ophiuchus) glares in the southwest during and just after twilight. It sets by midevening. Antares, less bright, sparkles redly 7° below it.

Saturn (magnitude +0.7) is the brightest "star" not far lower left of bright Venus in the dawn. Fainter Regulus (magnitude +1.4) is more or less between them.

Pluto (magnitude 14.0, in Sagittarius) is sinking in the southwest after dark.