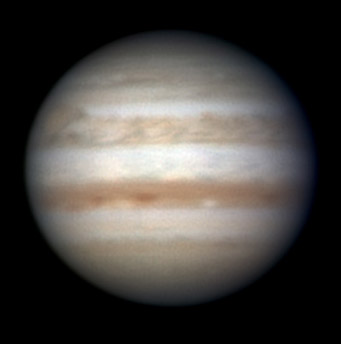 "Jupiter is getting more difficult now," writes imager Christopher Go in the Philippines. He caught this view of the re-formed South Equatorial Belt (above center) in twilight on February 11th just before Jupiter disappeared behind his building's roof.

The Great Red Spot is at left. "The SEB is already red in this area and it is also very turbulent," he notes. "The NEB is dark red, and note the dark and white ovals on the NEBn." South is up. 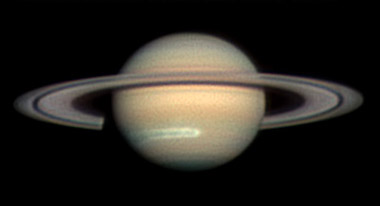 Saturn's new white spot now "looks like a comet," writes Christopher Go. This image exaggerates its contrast, but even visually "it is very distinct" in Go's 11-inch scope. He also noted that the North Equatorial Belt "is red and distinct now." South here is up.

And see an even more awesome Cassini image.

Mercury, Mars, and Neptune are hidden behind the glare of the Sun.

Venus (magnitude –4.2, in Sagittarius) shines as the "Morning Star" in the southeast before and during dawn.

Jupiter (magnitude –2.1, at the Pisces-Cetus border) shines brightly in the west-southwest at dusk and sets in the west around 9 p.m. Get your telescope on it in late twilight while it's still high. Jupiter has shrunk to only 35 arcseconds wide, but keep watch on its South Equatorial Belt re-forming.

Saturn (magnitude +0.6, in Virgo) rises around 10 p.m., but it's best seen in a telescope at its highest in the south in the early-morning hours (it transits around 3 a.m.). Don't confuse Saturn with Spica 8° or 9° below it during evening, and lower left of it before dawn. 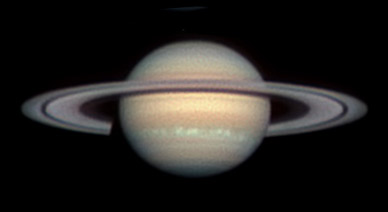 The other side of Saturn, imaged by Go on February 11th; the System III central meridian here is 264°. This is the side of Saturn where the white disturbance started, he notes. "Even though the head of the [disturbance] is on the other side of the planet, this area is still bright. The head has basically moved more than half around the planet now. The South Equatorial Belt can be seen just south of the ring." South is up.

In a telescope, Saturn's new white spot has spread into a double streak far around the planet, as seen here. Saturn's rings are 10° from edge on, their maximum for this year. See how many of Saturn's satellites you can identify in your scope using our Saturn's Moons tracker. 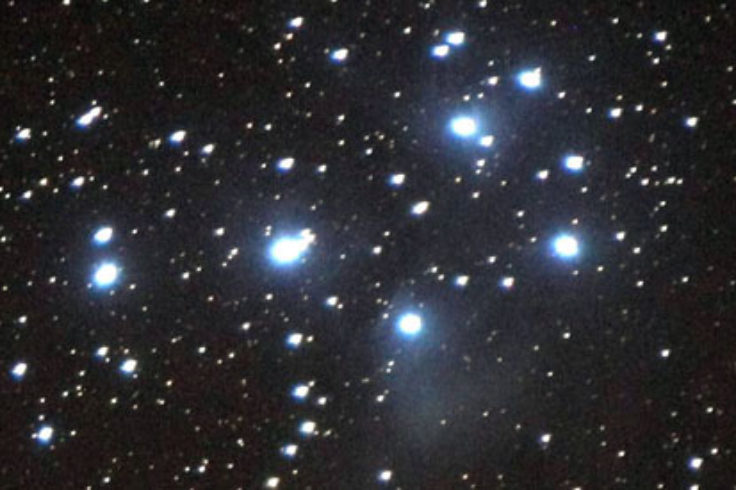