Some daily events in the changing sky for September 7 – 15. 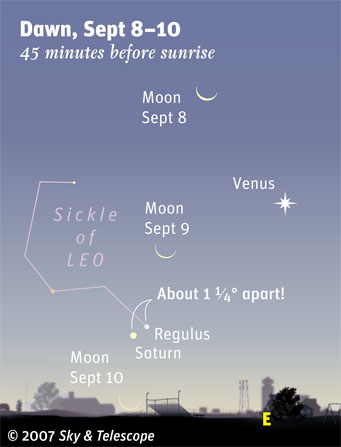 Once you get a telescope, to put it to good use you'll need a detailed, large-scale sky atlas (set of maps; the standard is Sky Atlas 2000.0) and good deep-sky guidebooks (such as Sky Atlas 2000.0 Companion by Strong and Sinnott, the even more detailed Night Sky Observer's Guide by Kepple and Sanner, or the enchanting though somewhat dated Burnham's Celestial Handbook). Read here how to use them effectively.

Mercury (magnitude 0) is deep in the glow of sunset. It's in the midst of a poor apparition for the Northern Hemisphere. Try looking for it with binoculars about 20 minutes after sundown, just above the west horizon. Don't confuse Mercury with Spica well to its upper left. 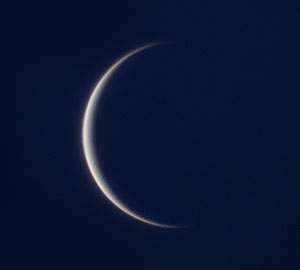 Venus (magnitude –4.4) shines low in the east at dawn, getting higher every day. A telescope shows it to be a thin crescent, but not as thin as in the image here taken August 30th. Venus is waxing in phase, as it's always doing when you see it as the "Morning Star."

Mars (magnitude +0.2, in Taurus) rises around 11:30 p.m. daylight saving time and shines very high in the southeast before dawn. It's left or lower left of twinkly Aldebaran, which is similarly colored but not as bright. Dimmer Beta Tauri is to Mars's left.

In a telescope Mars appears gibbous and 8.5 arcseconds in diameter, barely more than half the size it will reach around its Christmas-season opposition. The last two months of Martian dust storms seem to have abated, and though the planet's atmosphere is still bright and hazy with dust, surface features are beginning to show through a little better. But they're still low-contrast; don't expect to see much, especially with Mars still so tiny. 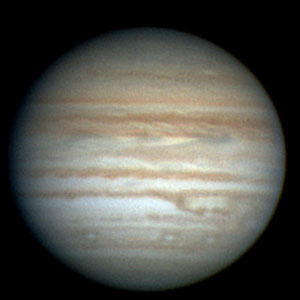 Surface features are again showing more normally through Mars's dusty atmosphere, as the past two months of dust activity abates. But contrast is still low. Dark Syrtis Major is upper right of center, near the evening terminator. Near bottom, the large, round basin of Hellas is unusually bright with dust. North is up, celestial east is left. Sean Walker took this stacked video image during poor seeing using color filters and a DMK 12AF04 camera on a 12.5-inch Newtonian reflector. The time was 7:45 UT September 3rd. Mars was 8.2 arcseconds in diameter.

Jupiter (magnitude –2.1, in southern Ophiuchus) glares in the south-southwest during twilight and sets around midevening. Get your telescope on it as early in twilight as you can. Antares, less bright, sparkles redly 6° below Jupiter.

Saturn (magnitude +0.7) is low in the glow of sunrise, about 16° lower left of brilliant Venus. If you pick up Saturn in binoculars or a wide-field scope, you can see that it's within 2° of fainter, twinkly Regulus (magnitude +1.4). Regulus is to Saturn's upper right.

Uranus (magnitude 5.7, in Aquarius) and Neptune (magnitude 7.8, in Capricornus) are well placed in the southeast to south during evening. Finder charts for them are in the July Sky & Telescope, page 60, and online. Uranus is still within about 1° of the orange-red type-M star Phi Aquarii, magnitude 4.2.

Pluto (magnitude 14.0, in the northwestern corner of Sagittarius) is highest in the south-southwest as soon darkness falls, about 16° east-northeast of Jupiter. A finder chart is in the July Sky & Telescope, page 60.

To be sure you get the current Sky at a Glance, bookmark this URL: