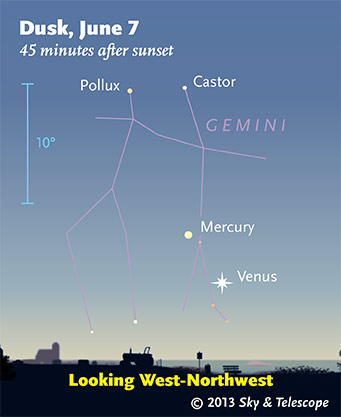 Jupiter is gone now, but Mercury is about at its peak altitude. The blue 10° scale is about the size of your fist held at arm's length.

For an easy-to-use constellation guide covering the whole evening sky, use the big monthly map in the center of each issue of Sky & Telescope, the essential guide to astronomy. Or download our free Getting Started in Astronomy booklet (which only has bimonthly maps).

Mercury and Venus remain in twilight view low in the west-northwest, but Mercury is fading: from magnitude +0.2 to +0.8 from June 7th to 14th. Mercury is upper left of much brighter Venus, magnitude –3.8. Their separation closes from 5° to 3.6° during this time. Above them shine fainter Castor and Pollux.

Mars and Jupiter are hidden in the glare of the Sun.

Saturn (magnitude +0.4, in Libra) glows in the south during evening, with Spica 12° to its right. Look almost as far to Saturn's left or lower left for Alpha Librae.

In a telescope, Saturn's rings are tilted 17° from our line of sight. See our guide "Scrutinizing Saturn" in the May Sky & Telescope, page 50, or the shorter version on our website. And identify Saturn's many moons at any time and date with our SaturnMoons utility or handier app.

Uranus (magnitude 5.9, in Pisces) is low in the east just before the beginning of dawn.

Neptune (magnitude 7.9, in Aquarius) is in the southeast before dawn begins. Finder charts for Uranus and Neptune.