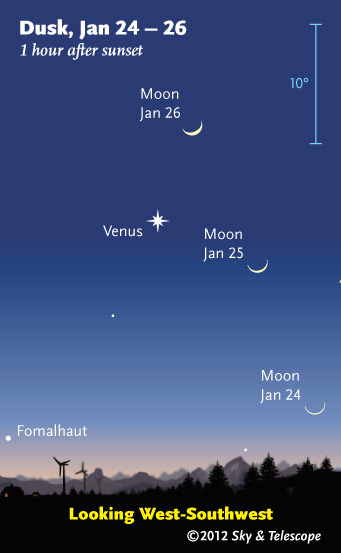 Watch the waxing Moon climb up past Venus later this week. (This scene is drawn for the middle of North America. European observers: move each Moon symbol a quarter of the way toward the one for the previous date. The blue 10° scale is about the size of your fist held at arm's length. The Moon is shown three times actual size.) 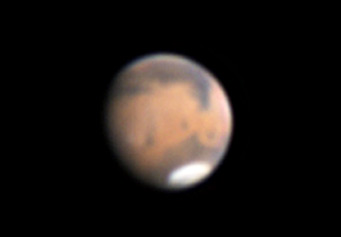 Venus (magnitude –4.0, in Aquarius) is the brilliant “Evening Star” shining in the southwest during and after dusk. It will continue to move a little higher each week all winter. In a telescope Venus is still a small gibbous disk, 14.5 arcseconds in diameter.

Mars (about magnitude –0.5, at the Leo-Virgo border) rises in the east around 9 p.m., far beneath Regulus and the Sickle of Leo. Mars is brightening rapidly now as it approaches Earth. It shines highest in the south, in best telescopic view, around 3 or 4 a.m. Mars has grown to 11½ arcseconds wide, on its way to 13.9″ when closest to Earth in early March.

Jupiter (magnitude –2.5, still at the Aries-Pisces border) shines highest in the south in early twilight, moves lower toward the southwest as evening advances, and sets in the west around midnight or 1 a.m. In a telescope Jupiter has shrunk to 40 arcseconds wide. 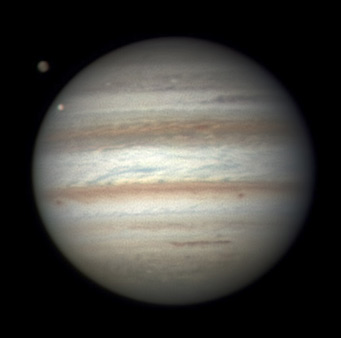 Jupiter is appearing smaller as Earth swings farther ahead of it in our faster orbit around the Sun. Christopher Go took this shot on January 18th at 11:20 UT, when large, dark Ganymede had recently left the planet's face and smaller, brighter Io was just about to. South is up, and the central-meridian longitude is 10°.

Saturn (magnitude +0.6, in Virgo) rises in the east around midnight and is high in the south in early dawn. Spica, a bit fainter at magnitude +1.0, is 7° to its right or upper right. Saturn's rings are now tilted a generous 15° from our line of sight.

Uranus (magnitude 5.9, near the Circlet of Pisces) is in the southwest right after dark.

Neptune (magnitude 7.9, at the Aquarius-Capricornus border) is disappearing into the glow of evening twilight.

Like This Week's Sky at a Glance? Watch our new weekly SkyWeek TV short, now also playing on PBS! 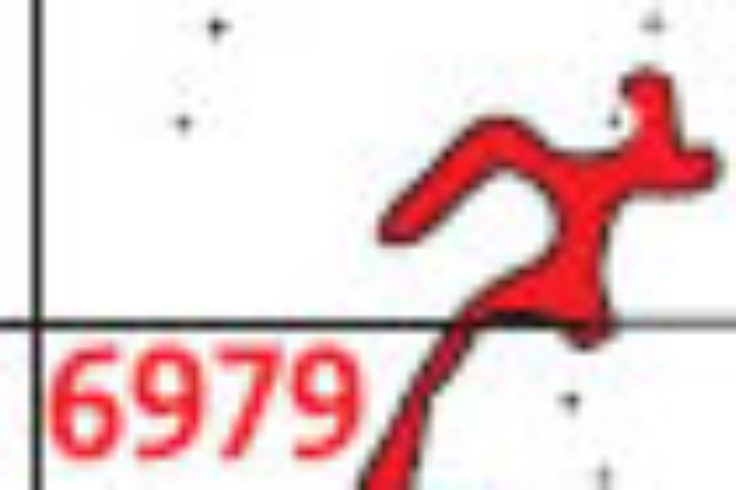 Beyond the Familiar Veil

An Observer's Guide to Mars