Some daily events in the changing sky for November 16 – 24. 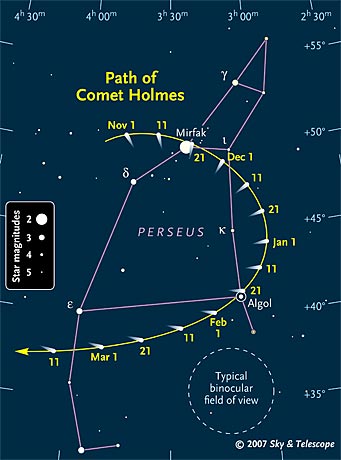 No matter how faint it gets or bright it stays, Comet Holmes will remain in Perseus all the way into next March. (The comet symbols are plotted at 0:00 Universal Time on the dates indicated. This is on the evening of the previous date in the time zones of the Americas. Click chart for larger version.)

Comet Holmes is passing very close by Alpha Persei (Mirfak) this week. In fact, it's so close to the star that the star hinders its visibility. Try averted vision (looking a little to one side) or binoculars. In addition, the comet is now fading as it continues to spread out. And moonlight is increasingly brightening the evening sky and compromising the view. See our wide-sky finder charts, full story, and reader photos.

Mercury (magnitude –0.7) is coming down from its best morning showing of the year. Look for it about 45 minutes before sunrise low in the east-southeast, very far lower left of bright Venus — and the earlier in the week the better. (Don't confuse Mercury with fainter Spica, which is much closer below Venus.)

To find your local sunrise time (and much else), make sure you've put your location into our online almanac. Be sure the Daylight Saving Time box is unchecked.

Venus (magnitude –4.3, in Virgo) is the bright "Morning Star" blazing in the southeast before and during dawn.

Mars, shining bright at magnitude –1.1 in the middle of Gemini, now rises as early as 7 or 8 p.m. and is up in fine view by 10 or 11. It shines very high toward the south in the early-morning hours — passing near the zenith, in fact, for mid-northern observers around 3 a.m.

In a telescope Mars now appears 14 arcseconds in diameter, nearly as wide as the 15.9" it will display around its Christmas-season opposition. The Martian dust storms of July and August have ended, but the planet's atmosphere still contains some dust, making surface features fairly low-contrast. 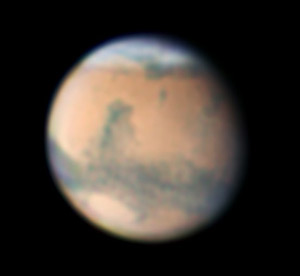 Syrtis Major juts upward in this image of Mars taken by S&T's Sean Walker on the morning of November 19th. The huge North Polar Hood of clouds was thin enough that surface features showed through. And note the bright haze filling the Hellas Basin, near the limb at the 7 o'clock position. Mars was 14 arcseconds wide, and the central-meridian longitude was 269°. Walker used a 12.5-inch reflector, a DMK 21AF04.AS camera, and CS RGB color filters.

For all about observing Mars with a telescope this season, see the guide and surface-feature map in the November Sky & Telescope, page 66. And try our Mars Profiler.

Jupiter (magnitude –1.8, in southern Ophiuchus) is disappearing into the sunset, very low above the southwest horizon in twilight.

Saturn (magnitude +0.7) rises around midnight and is very high in the south before and during dawn. Regulus, half as bright at magnitude +1.4, is 8° upper right of Saturn.

Uranus (magnitude 5.8, in Aquarius) is still well placed in the south early in the evening, high above Fomalhaut. Neptune (magnitude 7.9, in Capricornus) is getting lower in the west-southwest. Finder charts for them are in the July Sky & Telescope, page 60, and online — though this week the glary Moon gets in the way.

Pluto, near Jupiter, is lost in the sunset.

All descriptions that relate to your horizon or zenith — including the words up, down, right, and left — are written for the world's midnorthern latitudes. Descriptions that also depend on longitude (mainly Moon positions) are for North America. Eastern Standard Time (EDT) equals Universal Time (UT, UTC, or GMT) minus 5 hours.