Some daily events in the changing sky for August 10 – 18. 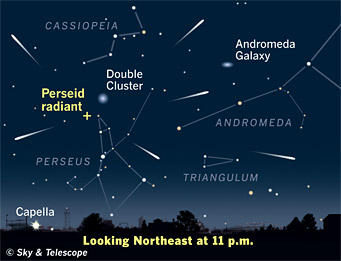 The Perseid meteors appear to diverge from the shower's "radiant" point near the border of Perseus and Cassiopeia — though not all at once as represented here. Under good sky conditions, you might see a meteor about once a minute on average late on the night of the 12th. The best direction to watch is wherever your sky is darkest, not necessarily northeast.

Jupiter (magnitude –2.3, in southern Ophiuchus) glares in the south-southwest during twilight and lower in the southwest later after dark. Antares, less bright, sparkles redly 5° below it; the two are evening companions all summer. Other stars of Scorpius shine below them and to the right.

Uranus (magnitude 5.7, in Aquarius) and Neptune (magnitude 7.8, in Capricornus) are well up in the south after midnight.

Pluto (magnitude 13.9, in the northwestern corner of Sagittarius) is highest right after dark, 18° east-northeast of Jupiter. Finder charts for Uranus, Neptune, and Pluto are in the July Sky & Telescope, page 60.

To be sure to get the current Sky at a Glance, bookmark this URL:
http://SkyandTelescope.com/observing/ataglance