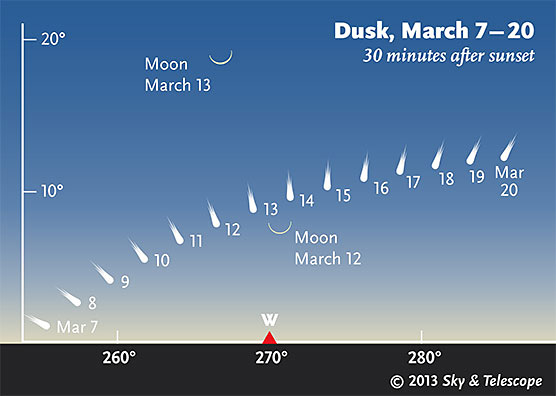 Look west after sunset near the horizon. Binoculars may be needed to pick Comet PanSTARRS out of the bright sky. Look too early and the sky will be too bright; too late and the comet will be too low. On the altitude scale at left, 10° is about the width of your fist held at arm's length.

Swinging toward its March 10th closest approach to Sun, Comet PanSTARRS emerges above the western sunset horizon this week for observers at mid-northern latitudes. Bring binoculars or a wide-field telescope; it's unlikely to be brighter than about 2nd magnitude, not necessarily easy to spot low in twilight through thick air.

The farther south you are, the earlier the date when you may first pick it up. As of February 28th it was already being seen naked eye (faintly) from the Southern Hemisphere. Next week the comet should come into its best visibility for mid-northern latitudes.

See our updates at SkyandTelescope.com/panstarrs. Get out and look! 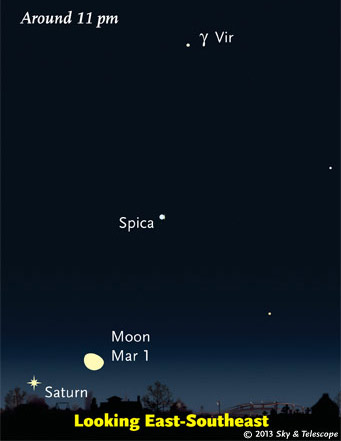 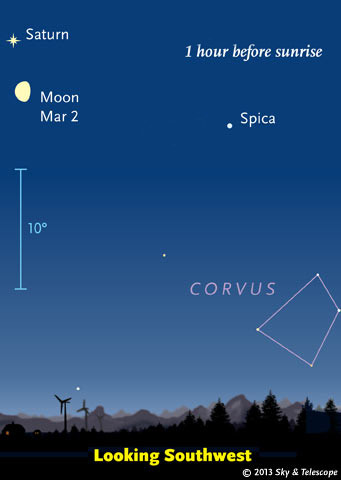 ...and they shine high by dawn. 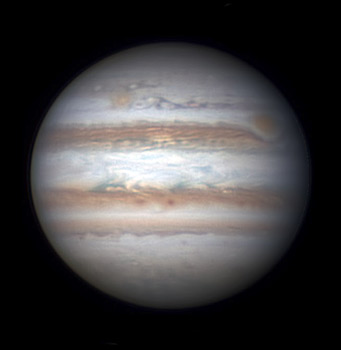 As Jupiter shrinks into the distance, its most striking characteristic in amateur telescopes is the single, broad South Equatorial Belt (above center) contrasting with the paired North Equatorial and North Temperate Belts. South here is up. Note the Great Red Spot at right, in a well-defined white Red Spot Hollow. Compare it to the slightly smaller and paler orange Oval BA left of the central meridian. Blue festoons mark the north edge of the bright Equatorial Zone but not its south edge. 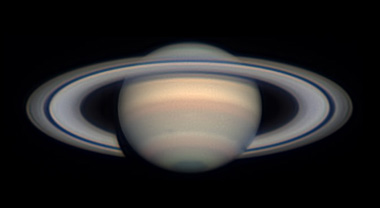 Mercury, Venus, and Mars are hidden in the glare of the Sun.

Jupiter (bright at magnitude –2.3, in Taurus) comes into view high in the south-southwest after sunset and dominates the southwest to west later in the evening. Left of Jupiter is orange Aldebaran; farther to its lower right are the Pleiades. They all set in the west-northwest around midnight or 1 a.m.

In a telescope, Jupiter is shrinking as Earth pulls farther ahead of it in our faster orbit around the Sun. This week it shrinks from 39 to 38 arcseconds wide.

Saturn (magnitude +0.4, in Libra) rises in the east-southeast around 10 or 11 p.m. Watch for it to come up well to the lower left of Spica and farther to the lower right of brighter Arcturus. Saturn shines highest in the south before the first light of dawn — more or less between Spica to its right and Antares farther to its lower left.

Uranus is sinking away in the west after sunset.

Neptune is behind the glare of the Sun. 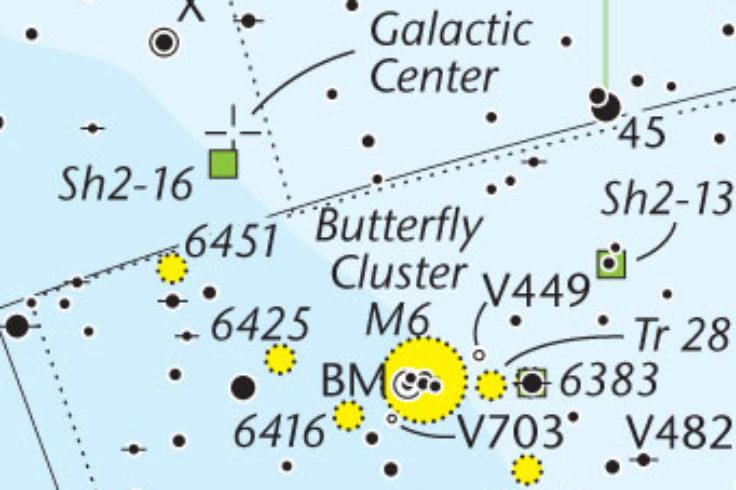