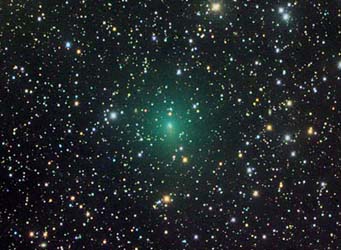 Rolando Ligustri photographed 103P/Comet Hartley 2 on September 6th. Since then the round coma has grown larger, but the central condensation remains weak.

Periodic Comet Hartley 2 remains about 6th magnitude, appearing big, round, and dim in binoculars. This week it's crossing Auriga and passing its closest to Earth (on October 20th). But moonlight is returning; the waxing Moon sets later each night. You can have a Moon-free view through about the morning of the 19th if you observe in the pre-dawn hours; find your local moonset time using our online almanac. What you'll see of the comet, if anything, depends strongly on the quality of your sky. See our article Comet Hartley 2 At Its Closest, with finder charts.

Venus is finally disappearing deep into the sunset.

Mars, dim at magnitude +1.5, continues to linger very low in the southwest after sunset. Look for it early in twilight with binoculars. Don't confuse it with twinklier Antares, well off to its left and a trace brighter. 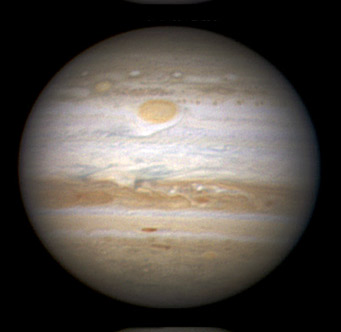 Jupiter (magnitude –2.8, at the Pisces-Aquarius border) shines in the east-southeast in twilight and high in the southeast by mid-evening — by far the brightest starlike point in the sky. It's highest in the south around 11 p.m. daylight saving time. Jupiter is having an unusually close apparition; in a telescope it continues to appear 48 or 49 arcseconds wide.

Saturn (magnitude +0.9, in Virgo) is emerging from the glow of sunrise. Look for it very low in the east about an hour before your local sunrise time. It's within 1° of fainter Gamma Virginis.

Neptune (magnitude 7.8, in Capricornus) is highest in the south after dinnertime. See our finder charts for Uranus and Neptune online or in the September Sky & Telescope, page 56. Can you see any color in Uranus and/or Neptune?

Pluto (magnitude 14.0, in Sagittarius) is sinking in the southwest after dark.