Some daily events in the changing sky for July 25 – August 2.

If you're in Europe or Asia, get ready for the eclipse of the Sun coming up August 1st! See the date below. Or watch the eclipse live on the web; see our article with links. 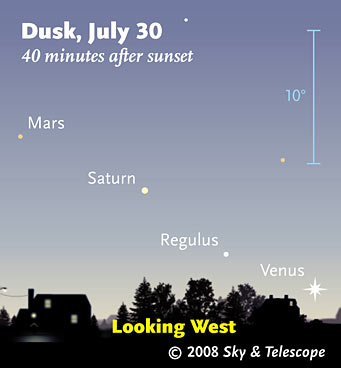 As July draws to its end, Mars, Saturn, Regulus, and Venus form a lineup that's almost evenly spaced. (The blue 10° scale is about the size of your fist held at arm's length.)

Jupiter (magnitude –2.7, in Sagittarius) shines with a steady glare in the southeast to south during evening. It's left of the Sagittarius Teapot and just below the bowl of the smaller, dimmer Teaspoon. It's highest by around 11 p.m. daylight saving time. For high-resolution scopes in excellent seeing, Jupiter's Great Red Spot and its little red companions put on an interesting performance in the last few weeks; see press release from the Hubble Space Telescope site.

Uranus and Neptune (magnitudes 5.8 and 7.8, respectively, in Aquarius and Capricornus) are well up in the southeast by midnight. Use our article and finder charts.

Pluto (magnitude 14.0, in the northwestern corner of Sagittarius) is highest in the south in late evening. If you've got a big scope and a dark sky, use our article and finder chart.