Some daily events in the changing sky for April 25 – May 3. 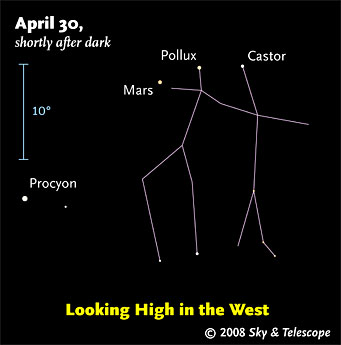 Watch as Mars moves past the heads of the Gemini twins in the next few days, while Procyon watches from below. The blue 10° scale is about the size of your fist held at arm's length. 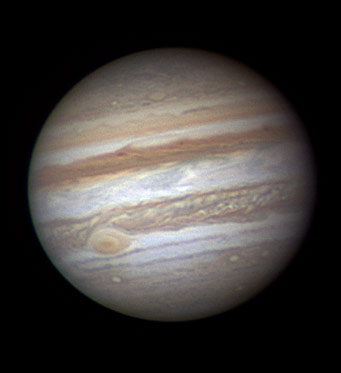 Amateur planetary imaging (by the stacked-video-frame method) continues to blow away anything you're ever likely to see directly in the eyepiece. Paul Haese in Australia took this image of Jupiter on the morning of April 28th, when Jupiter's System II central-meridian longitude was 92°. North is up (but remember that many telescopes will show south up). The North Equatorial Belt (brown band just above center) remains very dark. The South Equatorial Belt (just below center) is full of white turbulence. The Great Red Spot shows an internal ring and a central dark spot. Note the very different colors of the belts in the in the northern and southern hemispheres. Haese used a Peltier-cooled Celestron C14 Schmidt-Cassegrain telescope at about f/34 with a Skynyx 2-0 camera.

Mercury (about magnitude –1) is rapidly emerging into evening view. Look for it above the west-northwest horizon as twilight fades. It's getting higher and easier every day. Don't confuse it with Aldebaran, far to its upper left.

Mercury is often called "elusive," but by the end of this week it is plain and obvious as it passes south (lower left) of the Pleiades. See the sky scene above.

Mars (magnitude +1.2, in Gemini) shines high in the west during evening. It forms a curved line with Pollux and Castor to its upper right or right. Watch as the line becomes less curved every day. It straightens out completely on May 4th.

Compare Mars's color to that of Pollux, which is just about equally bright. Pollux is an orange giant of spectral type K0 III. To me, the tint of Mars looks slightly deeper.

In a telescope Mars is a disappointing 5.9 arcseconds wide — a very tiny gibbous blob.

Jupiter (magnitude –2.4, in eastern Sagittarius) rises around 1 or 2 a.m. daylight saving time and glares in the south-southeast by early dawn. The farther south you live, the higher you'll be able to observe it with your telescope before dawn gets too bright. 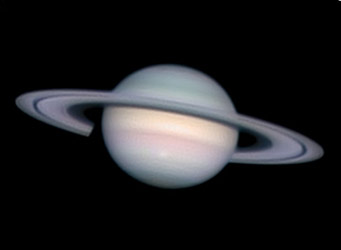 Saturn (magnitude +0.5, in Leo) glows very high in the south to southwest during evening, just 2¼° from fainter Regulus (magnitude +1.4). Saturn and Regulus will remain nearly this close together for a month to come.

Telescope users: can you see the new white storm on Saturn? How big a telescope will do it? See the picture caption to predict when the white spot will be turned into view (which happens at least twice a day).

There's more to Saturn than you may realize! See our Saturn observing guide in the April Sky & Telescope, page 66. Saturn's rings now appear open by 10°, our best view of them until December 2010.

Pluto (magnitude 14.0, in northwestern Sagittarius) is highest in the south before dawn's first light.