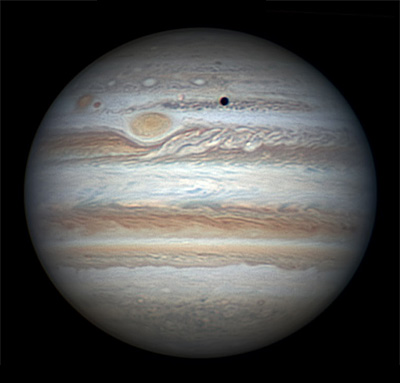 Christopher Go again shows what is possible imaging Jupiter with a 14-inch scope, a high-end planetary video camera, excellent seeing — and a whole lot of skill from years of practice. Don't expect to see anything approaching this visually in any telescope, or to get results like this on your first tries imaging.

The South Temperate Belt is barely visible along some of its length but prominent on the following side of the Great Red Spot. On the north side of the planet, the North Equatorial and North Temperate belts have become cleanly separated by the North Tropical Zone's return to whiteness.

Mercury, Venus, and Saturn form a diagonal line in the southeast as dawn begins to brighten. Venus is by far the brightest, at magnitude –3.9. Look well to its upper right for Saturn, magnitude +0.7, and farther on for Spica, magnitude +1.0. Look lower left of Venus for Mercury, magnitude –0.5. Mercury is having its best morning apparition of 2012. This line of four points is lengthening: it grows from 33° to 42° long this week.

And watch the waning crescent Moon step down the line on the mornings of December 9, 10, and 11, as shown above.

Mars (magnitude +1.2, in Sagittarius) remains low in the southwest in evening twilight. In a telescope it's just a tiny blob 4.3 arcseconds in diameter — hardly larger than Uranus!

Jupiter (magnitude –2.8, in Taurus) is just past opposition. As twilight fades it's already glaring low in the east. It climbs to dominate the eastern and southeastern sky through the evening, with orange Aldebaran 5° to its lower right and the Pleiades about twice as far to its upper right. Jupiter is highest in the south around 11 or midnight. In a telescope it's a big 48 arcseconds wide, essentially as large as it ever appears.

Uranus (magnitude 5.8, in Pisces) and Neptune (7.9, in Aquarius) are conveniently placed in the south right after dusk but move lower later. Finder charts for Uranus and Neptune. 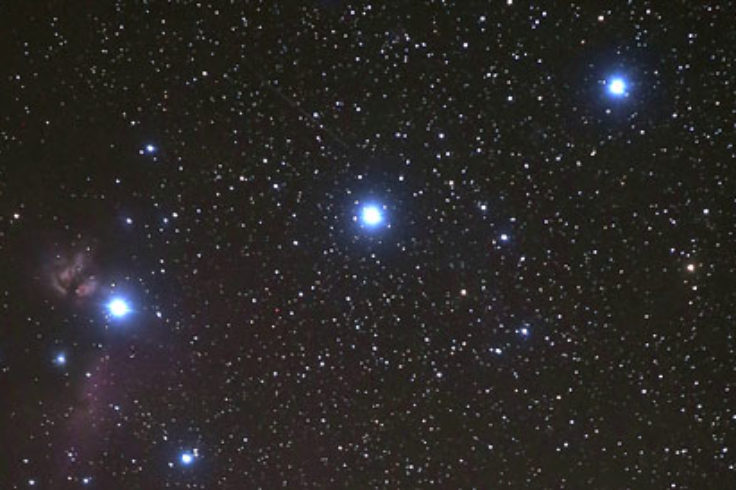