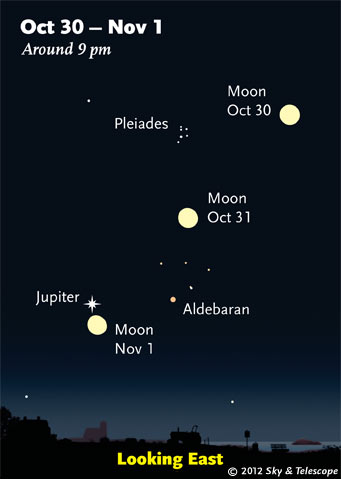 The Moon appears to pair up with Jupiter on November 1st. The Moon here is shown three times its actual apparent size, and is positioned for a viewer near the middle of North America. 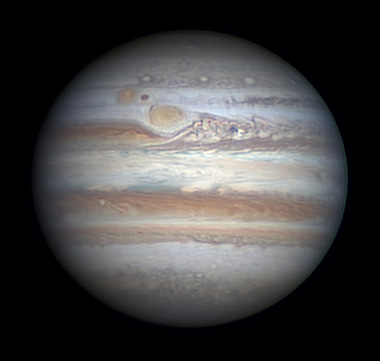 The Great Red Spot's side of Jupiter is busy indeed. On October 29th when Christopher Go shot this image from the Philippines, bright orange Oval BA and the little dark red dot following it had finished passing south of (above) the Great Red Spot. Huge turbulence roils the South Equatorial Belt behind the Great Red Spot, and in the midst of this, notice the tiny dark marking next to a bright little white outbreak.

The South Temperate Belt is barely visible along some of its length but prominent elsewhere. Four white ovals dot the South South Temperate Belt. On the north (lower) side of the planet, the North Equatorial and North Temperate belts have become cleanly separated by the North Tropical Zone's return to whiteness. An extremely wide blue festoon intrudes into the bright Equatorial Zone north of the Great Red Spot.

Mercury (magnitude –0.2) is having a poor evening apparition. Using binoculars, look for it about 30 minutes after sundown very low in the southwest, to the lower right of Mars and Antares.

Venus (magnitude –4.0, in Virgo) rises in darkness more than an hour before the first glimmer of dawn. By dawn it's shining brightly in the east.

Mars (magnitude +1.2, in Ophiuchus) remains low in the southwest in evening twilight. It's upper left of similar-looking Antares; they widen from 6° to 10° apart this week.

Jupiter (magnitude –2.7, in Taurus) rises in the east-northeast shortly after dark, with Aldebaran to its right. Above Aldebaran are the Pleiades.

Saturn is buried deep in the glow of sunrise.

Uranus (magnitude 5.8, in Pisces) and Neptune (magnitude 7.9, in Aquarius) are in in good view in the south during evening. Finder charts for Uranus and Neptune.

Like This Week's Sky at a Glance? Have a look at our SkyWeek TV short. It's also playing on PBS!

Viewing Mercury at Its Best