Some daily events in the changing sky for February 5 – 13.

Mercury (magnitude –0.2) is sinking low into the sunrise. Look for it just above the east-southeast horizon about 30 minutes before sunup. Binoculars help.

Venus is hidden deep in the sunset. 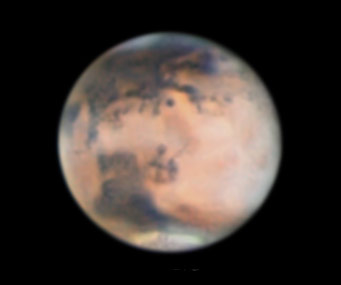 Dramatic things are happening on Mars's north polar cap (bottom) as it shrinks in the Martian springtime. Note the yellow dust storm on the cap's left side here, and the dulling of its right side compared to recent imagery in which it was bright white. At top are dark Mare Erythraeum, Margaritifer Sinus, Aurorae Sinus, and the Solis Lacus region. Lower left of center are dark Niliacus Lacus and Mare Acidalium. Note the many white clouds.

Veteran planetary imager Donald C. Parker of Coral Gables, Florida, took this superb image on the evening of February 2nd (at 4:00 Feb. 3 Universal Time), when the central meridian longitude was 62°. Click on the image for larger views and more information. South is up.

Mars, fiery bright at magnitude –1.1, shines in the east-northeast in twilight and higher in the east after dinnertime. It's in Cancer, more than halfway from Regulus below it to Pollux and Castor above it. Mars is highest in the south by 11 or midnight. Binoculars show M44, the Beehive Star Cluster, 3° or 4° roughly to Mars's south.

In a telescope Mars is still 13.8 arcseconds wide; it passed closest to Earth on January 27th and was at opposition on the 29th. The north polar cap has recently faded in brilliance due to dust, as seen at right. Identify other surface features using the Mars map and observing guide in the December Sky & Telescope, page 57.

Jupiter (magnitude –2.0) is descending into the sunset glow low in the west-southwest.

Saturn (magnitude +0.7, in Virgo) rises in the east around 9 p.m. and stands highest in the south around 2 a.m. In a telescope Saturn's rings are tilted only 4.5° from edge-on to us, and they'll narrow further in the coming months.

Uranus is sinking into the sunset.