Some daily events in the changing sky for October 16 – 24. 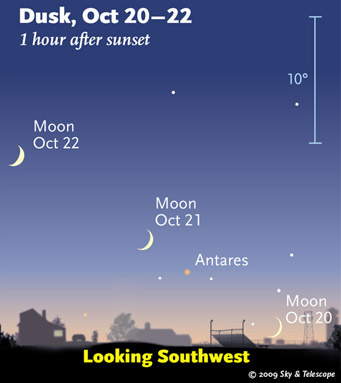 Say hello this week to the Moon coming up from its monthly conjunction with the Sun, and goodbye to Antares disappearing down toward its own conjunction.

Venus, Mercury, and Saturn are low in the east during dawn, changing configuration daily. Venus is by far the brightest. Mercury is barely above the horizon below Venus and may be gone from sight by week's end. Saturn just had a close conjunction with Venus (on October 13th) and now climbs higher to the bright planet's upper right. Look carefully; Saturn (magnitude +1.1) is only a hundredth as bright as Venus (magnitude –3.9). Binoculars help as dawn grows bright.

Mars (magnitude +0.6, in Cancer) rises around midnight and is very high in the southeast before dawn. It's below Gemini's head stars, Pollux and Castor. In a telescope Mars is still only 7.2 arcseconds wide: a tiny, fuzzy blob, though noticeably gibbous. Mars is on its way to an unremarkable opposition late next January, when it will be 14.1 arcseconds wide. 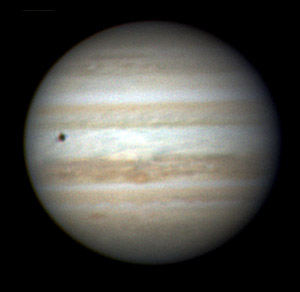 On this side of Jupiter away from the Great Red Spot, the South Equatorial Belt (dark band above center) is straight, double, and fading. The North Equatorial Belt is darker and busier. The black dot is the shadow of Io. Note the small red oval in the north edge of the NEB just past (left of) the central meridian. It used to be white but picked up dark material from the belt. South is up.

Christopher Go took this image on October 25th at 11:12 UT, when the System II longitude on the central meridian was 10°. The Great Red Spot follows behind by 3½ hours, at about longitude 138° (in the south edge of the SEB).

Stacked-video images like this show more detail than you're ever likely to see visually on Jupiter. For all of the Great Red Spot's central-meridian crossing times, good worldwide, use our Red Spot calculator, or print out our list for the rest of 2009.

Jupiter (magnitude –2.6, in Capricornus) shines brightly in the south in early evening and lower in the southwest as night grows late. It sets around 1 or 2 a.m.

Uranus (magnitude 5.7, below the Circlet of Pisces) is well up in the southeast to south during evening.

Neptune (magnitude 7.9, in Capricornus) is about 7° east of Jupiter.

Pluto (14th magnitude, in Sagittarius) is sinking low in the southwest after dark.