Mercury and Venus are still deep in the glow of the Sun. Late in the week Venus begins emerging into view very low in the east-southeast in bright dawn, as shown above.

Mars, dim at magnitude +1.4, continues to linger very low in the southwest after sunset. Use binoculars to scan for it early in twilight. Look also for fainter Antares twinkling to Mercury's left or lower left. 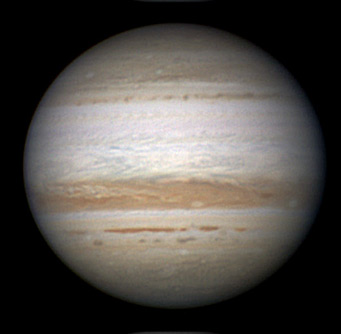 The non-Red-Spot side of Jupiter is interesting too, as seen in this image taken at 11:35 UT November 3rd. South is up. The South Equatorial Belt is still missing. The North Temperate Belt remains broad and dark with diagonal disturbances. Below it, is the North Temperate Belt broken into pieces, or are we seeing lots of red-brown "barges" merging together?

Don't expect an eyepiece view this sharp and steady any telescope, no matter how big! Planetary imager Christopher Go continues to demonstrate the extraordinary power of stacked-video imaging done with years of experience.

Jupiter (magnitude –2.8, at the Pisces-Aquarius border) shines high in the southeast to south during evening. It's by far the brightest starlike point in the sky. In a telescope it's still a big 47 arcseconds wide.

Saturn (magnitude +0.9, in Virgo) is low in the east-southeast in early dawn. Don't confuse it with brighter Arcturus far to its left. The best time to try observing Saturn with a telescope is in moderately bright morning twilight, perhaps an hour before your local sunrise time, when the planet will be less blurred by the low-altitude atmospheric mess. Saturn's rings have widened to 8° from edge-on.

Neptune (magnitude 7.9, in Capricornus) is highest in the south in early evening. See our finder charts for Uranus and Neptune online, or with article in the September Sky & Telescope, page 56. Can you see any color in Uranus and/or Neptune?

Pluto (magnitude 14.0, in Sagittarius) is disappearing in the southwest after dark.