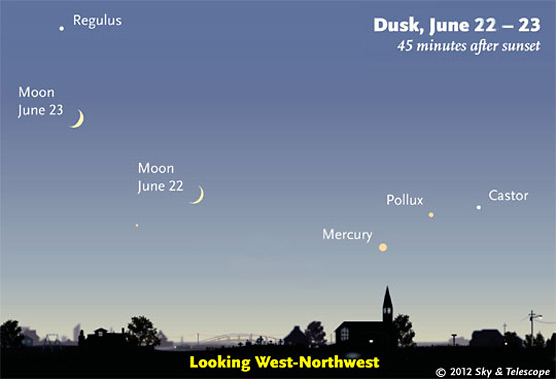 The waxing crescent Moon guides the way to Mercury, Pollux, and Castor far to its right. (The visibility of the faint objects in bright twilight is exaggerated here,) 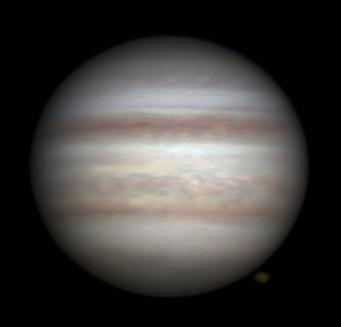 Jupiter is still low in the dawn for most of us, but from his low latitude in the southern Philippines, Christopher Go is already imaging the giant planet. It was 26° up for him at the time of this image on June 20th.

South here is up. The South Equatorial Belt above center has become relatively narrow and dark red-brown, while the North Equatorial Belt has turned wide and, in its southern two-thirds, turbulent. This is the opposite of how the two belts appeared last year! Ganymede is just off the lower right edge.

Mercury (about magnitude 0.0 and fading) is low in the west-northwest about 40 to 60 minutes after sundown. Well to its right are fainter Pollux and Castor.

Venus (magnitude –4.5) shines low in the east-northeast during dawn. Don't confuse it with Jupiter to its upper right. The two planets remain 5° or 6° apart this week, crossing the background of Aldebaran and the Hyades.

Mars (magnitude +0.8, in Virgo) shines orange in the southwest at dusk and lower in the west later. It's still about 25° from the Saturn-and-Spica pair to its left, but it's heading their way! Mars will shoot the gap between them in mid-August.

In a telescope Mars is gibbous and tiny (6.8 arcseconds wide), continuing to fade and shrink.

Jupiter (magnitude –2.0) shines low at dawn, to the upper right of Venus. See Venus above. 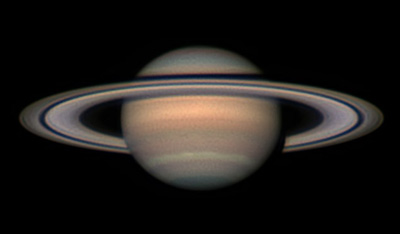 Saturn on June 18th, imaged by Christopher Go. South is up here. Note the bright, pale greenish North North Temperate Zone (NNTZ) with its slight whitish irregularities. This is the remains of the great white spot outbreak that began a year and a half ago.

Saturn (magnitude +0.6, in Virgo) shines in the southwest as twilight fades. Below it by 5° is Spica. Later after dark they move lower to the west-southwest.

Uranus (magnitude 5.9, at the Pisces-Cetus border) is in the east-southeast before the first light of dawn.

Neptune (magnitude 7.9, in Aquarius) is in the south-southeast before dawn. Finder charts for Uranus and Neptune. 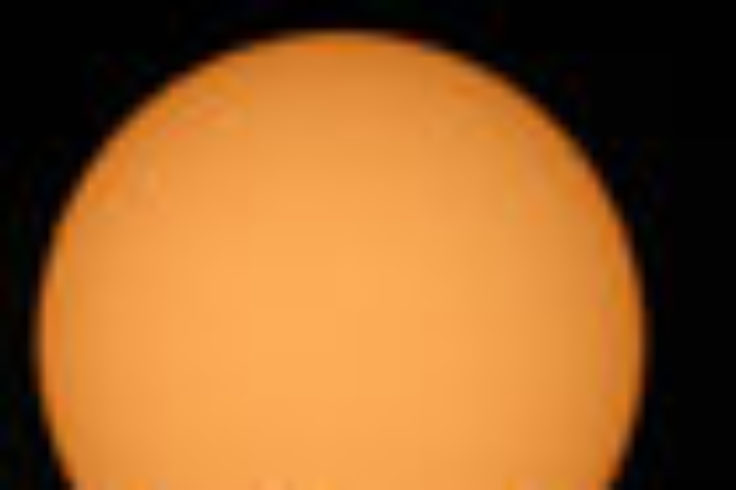 Where to See the Transit of Venus Online