Some daily events in the changing sky for June 6 – 14. 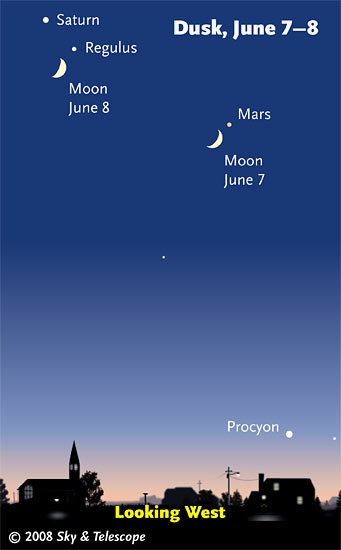 The waxing Moon, in its monthly march away from the Sun, poses first with Mars and then with Saturn and Regulus. (These scenes are drawn for the middle of North America. European observers: move each Moon symbol a quarter of the way toward the one for the previous date. For clarity, the Moon is shown three times its actual size.)

Mars (magnitude +1.6, in Cancer) shines high in the west after dark, to the lower right of the Saturn-and-Regulus couple as shown at the top of this page. Mars is drawing nearer to them every week. They'll have a close get-together in early July.

In a telescope, Mars is a minuscule 4.9 arcseconds wide — a very tiny blob. The Mars Phoenix Lander is near the north polar cap.

Jupiter (magnitude –2.6, in eastern Sagittarius) rises around 10 or 11 p.m. daylight saving time, left of the Sagittarius Teapot. It's highest in the south, and offering the sharpest views, before and during dawn.

In a large amateur scope during excellent seeing, a pair of white storms has been visible in Saturn's South Temperate Zone. This stacked-video image was taken at 11:15 UT on May 1, 2008, when the System II longitude on the central meridian was 70°. North is up.

Saturn (magnitude +0.7, in Leo) glows in the southwest after dark, about 3° upper left of fainter Regulus (magnitude +1.4), as shown at the top of the page. They're gradually getting wider apart.

Uranus and Neptune (magnitudes 6 and 8, respectively, in Aquarius and Capricornus) are in the southeast before dawn. Use our article and finder charts.

Pluto (magnitude 14.0, in northwestern Sagittarius) is well up in the southeast by 11 or midnight. It comes to opposition on June 20th. If you've got a big scope and ambition to match, here's our article and finder chart.