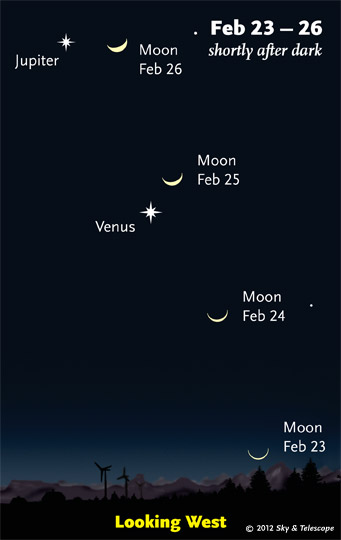 The waxing Moon pairs up with the two brightest planets on two days in succession. (These scenes are drawn for the middle of North America. European observers: move each Moon symbol a quarter of the way toward the one for the previous date. For clarity, the Moon is shown three times actual size.)

Mercury (about magnitude –1.0) is emerging into its best evening apparition of 2012. As the afterglow of sunset fades in the west, look for Mercury far to the lower right of bright Venus. 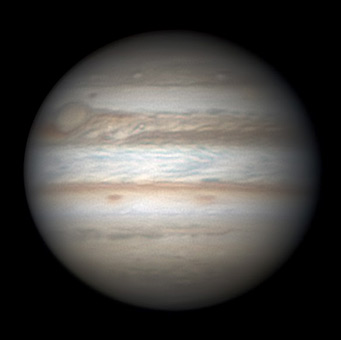 Venus and Jupiter (magnitudes –4.2 and –2.2) are the two bright “Evening Stars” shining in the southwest to west during and after dusk. Venus is the brighter, lower one. Watch Jupiter closing in on it by 1° every day! The gap between them narrows this week from 17° to 10°. These are the two brightest celestial objects after the Sun and Moon.

In a telescope, Venus is a brilliant white gibbous disk 18 arcseconds tall and 65% sunlit. Jupiter shows a much lower surface brightness, being farther from the Sun, but it's bigger: 36 arcseconds wide.

Mars (about magnitude –1.2, in western Leo) is nearing its March 3rd opposition. It rises bright fire-orange in the east during twilight and dominates the eastern sky after dark. The star to its left or lower left is Denebola, the tail of Leo. Mars shines highest in the south, in best telescopic view, around midnight or 1 a.m.

In a telescope Mars has grown to 13.7 or 13.8 arcseconds wide, basically identical to the 13.9″ it will display when it's nearest to Earth March 5th.

South is up. Sinus Sabaeus and Sinus Meridiani are above center in the image at left. The North Polar Cap (NPC) has been shrinking in the Martian northern-hemisphere spring, exposing the dark collar around it. "Note the rift in the NPC," writes Walker, "which corresponds to the position of Rima Tenuis." 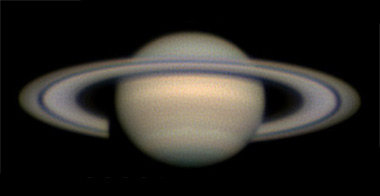 Saturn (magnitude +0.5, in Virgo) rises in the east around 10 p.m. and shines highest in the south around 3 or 4 a.m. Spica, a little fainter at magnitude +1.0 (and bluer), is 7° to Saturn's right or upper right. Saturn's rings are tilted a generous 15° from our line of sight, the most open the rings have appeared since 2007.

Uranus is disappearing into the sunset. 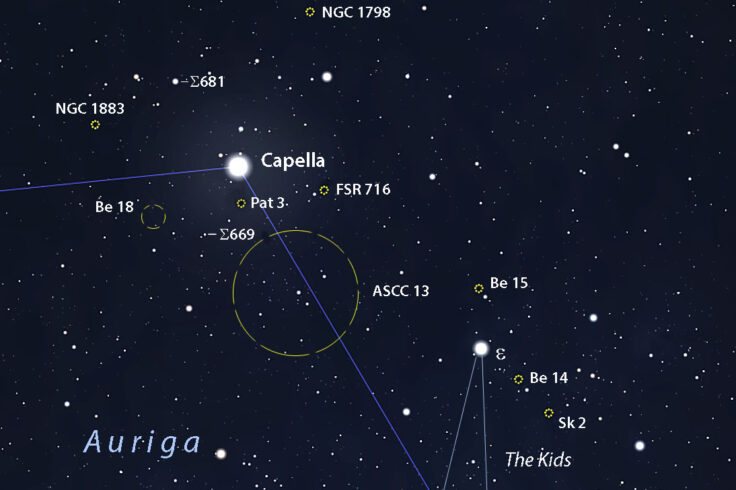 Foraging for Deep-sky Delights with Capella, the Goat Star 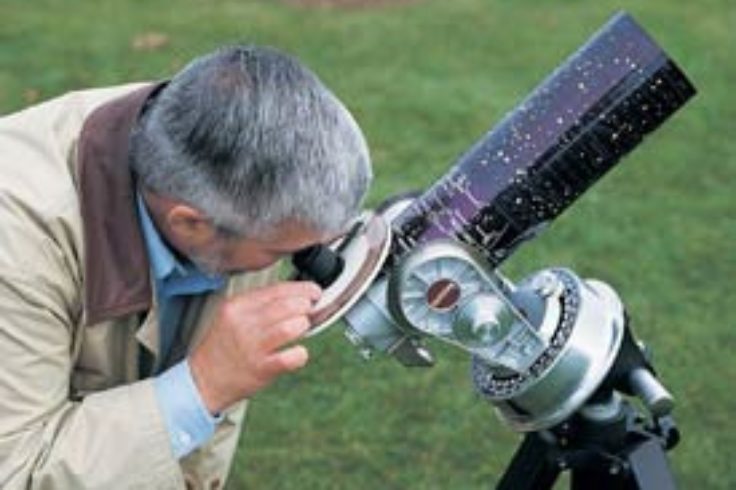