Some daily events in the changing sky for October 9 – 17. 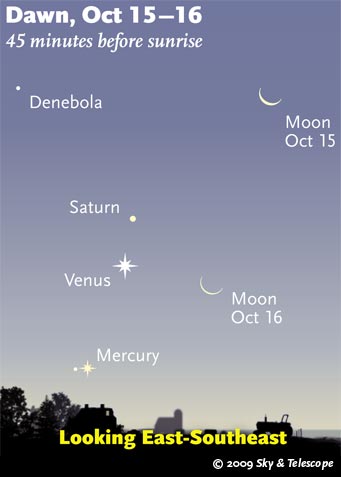 The Moon joins the dawn planet scene on the mornings of the 15th and 16th. (The visibility of faint objects in bright twilight is exaggerated here.)

Want to become a better amateur astronomer? Learn your way around the constellations. They're the key to locating everything fainter and deeper to hunt with binoculars or a telescope. For an easy-to-use constellation guide covering the whole evening sky, use the big monthly map in the center of each issue of Sky & Telescope, the essential magazine of astronomy. Or download our free Getting Started in Astronomy booklet (which only has bimonthly maps). Mercury is magnitude –0.9 but becoming more dimmed by atmospheric extinction. Saturn is a forlorn magnitude +1.1. Venus shines 100 times brighter than Saturn at magnitude –3.9. Bring binoculars! And see our article about this dawn planet dance.

Best viewing may be about 50 minutes before your local sunrise time. And when exactly is that? You can always find your sunrise and sunset times (and much else) once you put your location into our online almanac. (If you're on daylight saving time like most of North America, make sure the Daylight Saving Time box is checked.) 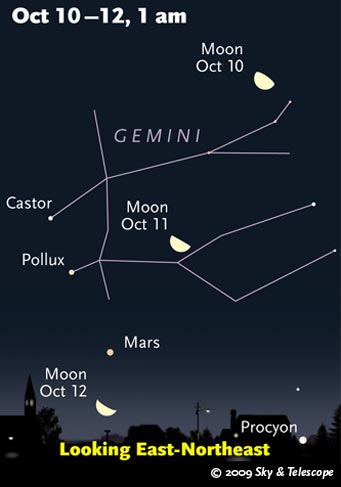 Stay up after midnight to make the acquaintance of Mars. For a few days, the Moon helps point the way. (These scenes are drawn for the middle of North America. European observers: move each Moon symbol a quarter of the way toward the one for the previous date. For clarity, the Moon is drawn three times actual size.)

Mars (magnitude +0.7) rises around midnight and is very high in the southeast before dawn. It's near Gemini's head stars, Pollux and Castor. In a telescope Mars is still only 7 arcseconds wide: a tiny, fuzzy blob, though noticeably gibbous. Mars is on its way to an unremarkable opposition late next January, when it will be 14 arcseconds wide.

Jupiter (magnitude –2.6, in Capricornus) shines brightly in the south-southeast as twilight fades — it's the first "star" to appear after sunset. Jupiter is in quadrature (90° east of the Sun) on October 6th, so all month it displays its greatest difference in lighting between its east and west sides: not dramatic in a telescope, but noticeable.

Uranus (magnitude 5.7, below the Circlet of Pisces) is well up in the southeast during evening.

Neptune (magnitude 7.8) is in Capricornus 7° east of Jupiter.

See our finder charts for Uranus and Neptune. For a guide to spotting the challenging satellites of Uranus and Neptune at any date and time (you'll need a fairly big scope), see the October Sky & Telescope, page 59. October 10th marks the 163rd anniversary of William Lassell's discovery of Neptune's big moon Triton.

Pluto (14th magnitude, in Sagittarius) is sinking low in the southwest after dark.

A Sampling of Star Clusters