Some daily events in the changing sky for August 31 – September 8. 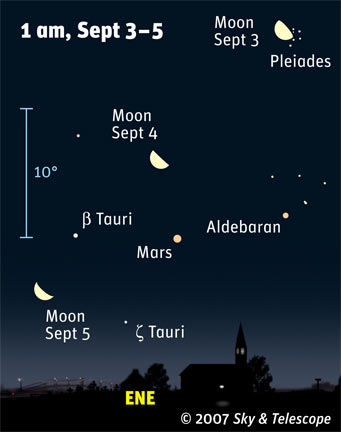 Night owls can note the waning Moon passing the Pleiades, Aldebaran and Mars. These scenes are drawn for the middle of North America. European observers: move each Moon symbol a quarter of the way toward the one for the previous date. The blue 10° scale is about the size of your fist held at arm's length. For clarity, the Moon is shown three times actual size.

Update: Yup, it happened right on schedule: a flurry of meteors radiating from the direction of Auriga around 4:30 a.m. Pacific Daylight Time, with a high proportion of bright fireballs. Chalk up another success for modern meteor-forecasting techniques. See our article.

Keep track of Chi Cyg (in the shaft of the Northern Cross) using binoculars and the comparison-star chart in the September Sky & Telescope, page 58, or online.

Look far, far below Cassiopeia, and somewhat left, for bright Capella slowly rising above the horizon around 9 or 10 p.m. depending on where you live.

Once you get a telescope, to put it to good use you'll need a detailed, large-scale sky atlas (set of maps; the standard is Sky Atlas 2000.0) and good deep-sky guidebooks (such as Sky Atlas 2000.0 Companion or the enchanting though somewhat dated Burnham's Celestial Handbook). Read here how to use them effectively.

Mercury (about magnitude –0.5) is deep in the glow of sunset. It's in the midst of a poor apparition for the Northern Hemisphere. Try looking for it with binoculars about 20 minutes after sunset just above the west horizon. Don't confuse Mercury with Spica far to its upper left.

Venus (magnitude –4.4) is emerging up from the glow of sunrise, beginning its grand apparition as the Morning Star for the next half-year. Look for it above the east horizon about an hour before sunup. It's getting a higher every day. (To find your local sunrise time, make sure you've put your location into our online almanac. If you're on daylight saving time like most of North America, make sure the Daylight Saving Time box is checked.) 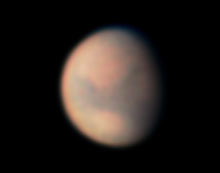 As the Moon wanes further, it descends into the glow of dawn past Venus and the Saturn-Regulus pair.

Mars (magnitude +0.3, in Taurus) rises around midnight daylight saving time and shines very high in the southeast before dawn. It's left of twinkly Aldebaran, which is similarly colored but not quite as bright, and right of dimmer Beta Tauri. Above Aldebaran are the Pleiades, as shown at the top of this page.

In a telescope Mars is 8.2 arcseconds in diameter, barely more than half the size it will reach around its Christmas-season opposition.

Incidentally: if friends or family are still asking you about the e-mail chain letter claiming that Mars will look as big and bright as the full Moon, point them to our article about the August Mars Hoax.

Jupiter (magnitude –2.2, in southern Ophiuchus) glares in the south-southwest during twilight and lower in the southwest after dark. Get your telescope on it as early in twilight as you can. Antares, less bright, sparkles redly 5° below Jupiter; the two have been evening companions all summer.

Saturn (magnitude +0.6) remains deep in the glow of sunrise, 15° lower left of brilliant Venus. If you pick up Saturn in binoculars or a wide-field scope, you can see that it's about 1° from fainter, twinkly Regulus (magnitude +1.4) all week. Regulus is to Saturn's right.

Jupiter is shrinking as Earth pulls away from it, making its features harder to resolve. S&T's Sean Walker took this image on Thursday evening, August 2nd (at 1:08 Aug. 3 UT). "Seeing was better than average, but transparency was low," he says. Notice how, as Jupiter moves far from opposition, its celestial east limb is slightly shaded while sunlight strikes the western limb a little more directly.

Uranus (magnitude 5.7, in Aquarius) and Neptune (magnitude 7.8, in Capricornus) are well up in the southeast during evening and are highest in the south around midnight. Uranus remains less than 1° from orange Phi Aquarii, magnitude 4.2. Finder charts for Uranus and Neptune are in the July Sky & Telescope, page 60, and online.

Pluto (magnitude 14.0, in the northwestern corner of Sagittarius) is highest in the south-southwest as soon as it gets dark, about 16° east-northeast of Jupiter. A finder chart is in the July Sky & Telescope, page 60.