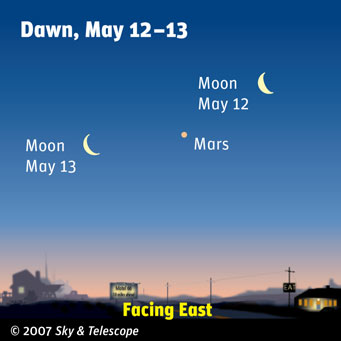 If you're an early riser, you can use the Moon to find your way to an early sighting of Mars — which will blaze at opposition in the evening sky next Christmas. (These scenes are drawn for the middle of North America. European observers: move each Moon symbol a quarter of the way toward the one for the previous date.)

Mercury (about magnitude –1) is becoming visible low in the sunset, getting easier every day. About 45 minutes after the Sun goes down, look for it just over the west-northwest horizon, far to the lower right of Venus.

Look also for fainter Aldebaran left of Mercury at the beginning of the week; lower left of it later in the week. And high above Mercury is Beta Tauri. 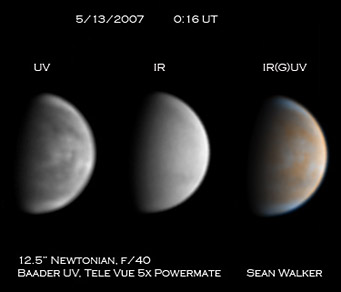 Sky & Telescope's Sean Walker continues his Venus imaging as the planet slowly enlarges and wanes. As usual, its clouds were full of detail in the ultraviolet last Saturday evening (May 13th Universal Time) — and, for a change, the seeing was good enough for a few near-infrared details to show as well. Walker made the color rendition by showing ultraviolet as blue, infrared as red, and adding a green channel created by interpolating between the two.

Venus (magnitude –4.2, in Gemini) is the brilliant "Evening Star" in the west during and after twilight. This month Venus is at its peak evening height for the year.

Above Venus are Pollux and Castor. Watch them slide down toward the bright planet day by day. A telescope will show that Venus is nearing its half-lit phase, while enlarging a little week by week.

Mars (magnitude +0.9, in Pisces) is still low in the east-southeast during dawn. Though it remains pathetically tiny for now — a mere 5.5 acrseconds in apparent diameter, a featureless little blob in most scopes — be patient. Earth isd catching up to Mars in our faster orbit around the Sun. When we pass it this December, Mars will appear nearly 16

e. That still won't be very large, however; Mars was 25

e around its opposition in August 2003. 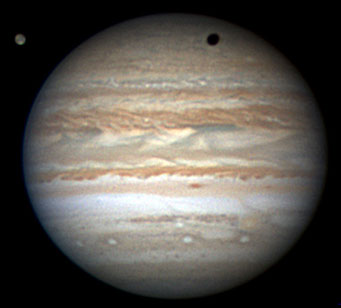 This isn't a Hubble photo; it was taken from the ground by an amateur using an 11-inch telescope, video camera, and the frame-stacking technique. Christopher Go has not only mastered the entire process, he benefits from his low latiitude of 10° north (in Cebu, Philippines) where Jupiter passes not far from overhead. Note the detail on slightly gibbous Ganymede at upper left and the noncircular shape of Ganymede's shadow projected onto Jupiter's slanted surface near the limb. The reddish Oval BA (Red Spot Junior) it at lower right, with a red ring outlining a lighter center. The festoon activity in the Equatorial Zone shows weird variety. "The NEB [North Equatorial Belt] is still very busy with a lot of rift activity," Go writes. "There is a new bright white spot above the NTB [North Temperate Belt] just after [following; right of] the central meridian. Note the NTB is turning red like the NEB!" North is up. Click image for even more impressive view.

Jupiter (magnitude –2.5, in southern Ophiuchus) rises in the east-southeast around 10 p.m. daylight saving time and dominates the south in the early-morning hours.

Antares, less bright, sparkles 9° to Jupiter's right in the evening, and to its lower right before dawn.

Saturn (magnitude +0.4, at the Leo-Cancer border) shines high in the southwest to west during evening.

Uranus (magnitude 6, in Aquarius) is low in the east-southeast before dawn, upper right of Mars.

Neptune (magnitude 8, in Capricornus) is in the southeast just before dawn.

Pluto (magnitude 14, in northwestern Sagittarius) is not far from Jupiter in the south during the early morning hours.