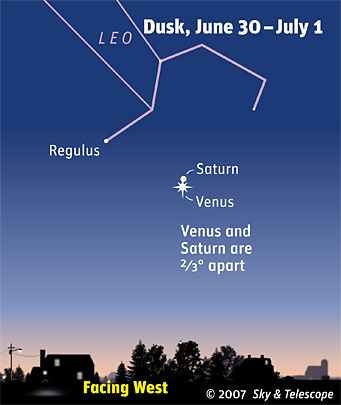 Don't miss the Venus-Saturn conjunction on the 30th! Mark your calendar.

Venus (magnitude –4.5, at the Cancer-Leo border) is the brilliant "Evening Star" in the west during twilight. Watch fainter Saturn closing in on it each day! See "Saturn" below.

Mars (magnitude +0.8, crossing from Pisces into Aries) is gradually getting higher in the eastern sky before dawn. In a telescope, it's still just a tiny blob 6 arcseconds wide. 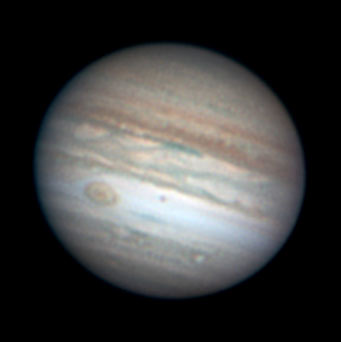 Jupiter's Great Red Spot stands in striking contrast to its white surroundings this observing season. Sky & Telescope's Sean Walker shot this stacked-video-frame image from his home in New Hampshire around midnight EDT on the night of June 14–15, using a 12.5-inch Newtonian reflector at about f/40. The seeing was excellent despite Jupiter's rather low altitude in the sky as seen from his latitude of 43° north.

Jupiter (magnitude –2.5, in southern Ophiuchus) was at opposition on June 5th. It glares in the southeast at dusk and dominates the south by 11 p.m. daylight saving time. Antares, less bright, sparkles 6° to Jupiter's lower right. These two will be evening companions all summer.

Saturn (magnitude +0.6, in Leo) is in the west during evening, closing in on dazzling Venus from the upper left. The gap between them shrinks from 6° on the 22nd to just 0.7° at their conjunction on the 30th!

Regulus, less bright at magnitude +1.4, is 8° to Saturn's upper left. And look north (upper right) of Regulus by 8° for 2nd-magnitude Algieba (Gamma Leonis).

Pluto (magnitude 13.9, in the northwestern corner of Sagittarius) is not far from Jupiter in the south in late evening (it was at opposition on June 18th). Finder charts for Uranus, Neptune, and Pluto are in the July Sky & Telescope, page 60.