The bright International Space Station continues to have many good flyovers this week. Amaze your friends! Show them one of its passes above your hometown using our custom prediction generator.

Comet Boattini, about 6th magnitude, is visible this week from the southernmost US, the tropics, and the Southern Hemisphere, now that the Moon is out of the early-evening sky. The comet is crossing northern Pyxis and Puppis: low in the southwest right after dusk for the latitudes of the southern US. See our article and finder charts. It's been seen naked-eye from Australia. 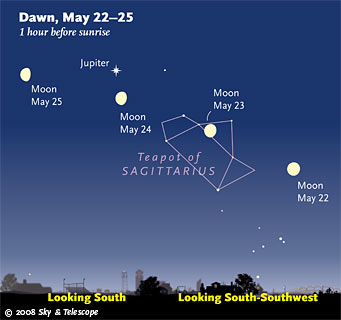 In early dawn later this week, the waning Moon marches past the Sagittarius Teapot and Jupiter. The scene is plotted for the middle of North America. European observers: move each Moon symbol a quarter of the way to the one for the previous date. 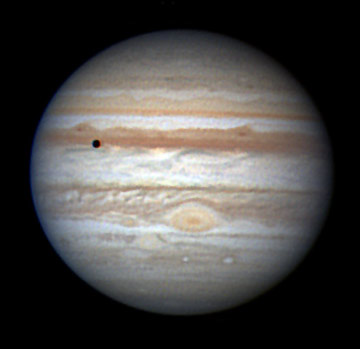 Jupiter on May 24th. The North Equatorial Belt, above center, "is getting lighter in color from the deep dark red a few weeks ago," writes photographer Christopher Go. The black dot on it is the shadow of Io. Visible below center are not just one red spot but three; see picture below. The Great Red Spot remains near System II longitude 121°. North is up (though many telescopes show south up).

Mars (magnitude +1.5, in Cancer) shines high in the west after dark, off to the upper left of the Castor-and-Pollux couple. Each week Mars is moving farther away from them and closer to the Saturn-and-Regulus couple to Mars's upper left. Mars, Saturn, and Regulus will have close get-together in early July.

In a telescope, Mars is a minuscule 5.1 arcseconds wide — a very tiny blob.

Jupiter (magnitude –2.6, in eastern Sagittarius) rises around 11 or midnight daylight saving time, left of the Sagittarius Teapot. It's highest in the south, and therefore sharpest in a telescope, shortly before dawn. (The table of Jupiter's satellite phenomena in the May Sky & Telescope is incorrect; use this corrected version.) 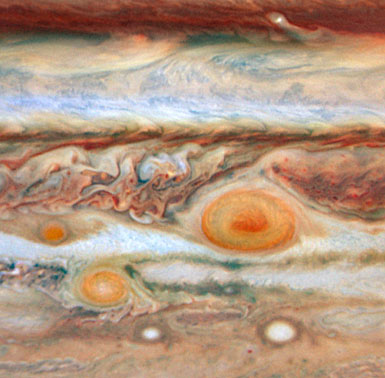 The Hubble Space Telescope caught Jupiter's three red spots on May 10, 2008. They're closing in toward each other daily. The Great Red Spot is at right, Oval BA ("Red Spot Junior") is the lowest, and 2008 Oval 2 is at left. Color contrast is exaggerated. North is up. Read more.

Even today, the cause of the coloring is not known for sure. The leading theory is that when a storm grows strong enough, it dredges up some compound from deep below the clouds and lofts it to unusually high altitude, where ultraviolet sunlight causes a chemical reaction that produces the red stuff. See full coverage of the recent Jupiter campaign by Hubble and Keck.

In the last few weeks, planetary scientists have been using the Hubble and Keck telescopes for a coordinated, multi-wavelength observing campaign to track Jupiter's current upsurge of activity and to tackle its chemical mysteries. Start here.

Saturn (magnitude +0.7, in Leo) glows high in the southwest after dark, 2½° above fainter Regulus (magnitude +1.4). They're quite the eye-catching couple, though they're gradually getting wider apart now.

Telescope users: there's more to Saturn than you may realize! See our Saturn observing guide in the April Sky & Telescope, page 66.

Uranus and Neptune (magnitudes 6 and 8, respectively, in Aquarius and Capricornus) are in the east and southeast just before dawn. Use our article and finder charts.

In a large amateur scope during excellent seeing, a pair of white storms is visible in Saturn's South Temperate Zone. This stacked-video image was taken at 11:15 UT on May 1, 2008, when the System II longitude on the central meridian was 70°. North is up.

To find when the white spots are back in view the same way as seen here: For your date (in Universal Time), look up Saturn's System II central-meridian longitude in this table (it's the "CMII" column). That's the value for 0:00 UT that date. To this value, add 33.8° for each whole hour since 0:00 UT, and 0.56° for each minute, for the time you plan to observe. See what you get. Find a good Saturn-observing date and time for you that results in something around 70°, and plan to be out then with your scope.

P.S.: Here's an incredible closeup shot of the storm by Cassini taken on March 4th. And Cassini's radio instruments find that the storm is full of lightning.

Pluto (magnitude 14.0, in northwestern Sagittarius) is well up in the southeast after midnight. If you've got a big scope and ambition to match, use our article and finder chart. 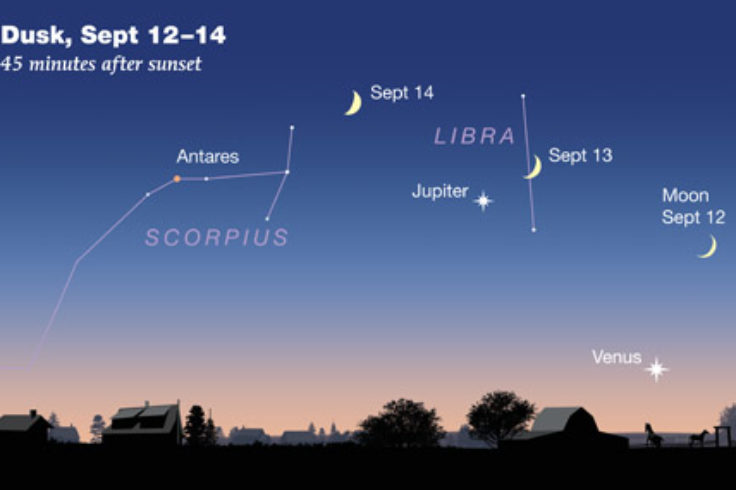