Some daily events in the changing sky for October 24 – November 1. 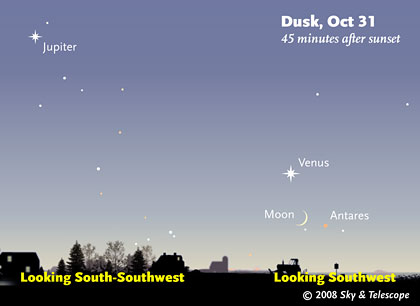 Jupiter and Venus are well along in their great march toward each other. They're on their way to a fine conjunction on November 30th and December 1st. After sunset on Halloween, look for the thin Moon below Venus with much fainter Antares nearby (binoculars help).

Mercury (magnitude –0.8) is having its best morning apparition of 2008. Look for it low in the east, far below Saturn and perhaps a bit left, about 60 to 45 minutes before sunrise. See the illustration at the top of this page.

You can always find your local sunrise time, and much else, once you put your location into our online almanac. If you're on daylight saving time, make sure the Daylight Saving Time box is checked. 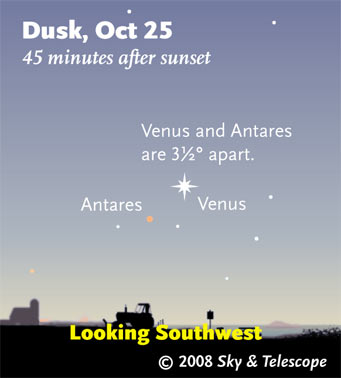 Near Venus, Can you still see Antares through the sunset afterglow?

Venus (bright at magnitude –3.8) is getting higher and more prominent after sunset. Look for it above the southwest horizon in twilight. Binoculars will help you spot Antares lower left of Venus early in the week, and directly below it later in the week.

Vesta, the brightest asteroid, is easily spottable with binoculars at magnitude 6.5 in the head of Cetus. It gets high late in the evening. Use the finder chart in the November Sky & Telescope, page 67.

Jupiter (bright at magnitude –2.2, in Sagittarius) shines in the south-southwest in twilight, but lower in the southwest later — so get your scope on it early!

In the coming month watch Jupiter close in on Venus, which is currently far to its lower right, by 1° per day. They're 38° apart on October 24th and 31° on the 31st. These two brightest planets are heading toward a spectacular conjunction, 2° apart, on November 30th and December 1st.

Saturn shines in the east before and during dawn. Don't confuse it with fainter Regulus about 18° (roughly two fist-widths at arm's length) to its upper right. A telescope will show that Saturn's rings have turned nearly edge on; they're currently tilted 2° to our line of sight and closing. They'll reach a minimum of 0.8° at the end of the year, then start opening again.

Uranus and Neptune (magnitudes 5.8 and 7.9, respectively, in Aquarius and Capricornus) are in the southeast and south during evening. Use our article and finder charts or the chart in the September Sky & Telescope, page 63.

Pluto (magnitude 14) is getting low in the southwest after dark.