M101 supernova at its peak! The Type Ia supernova discovered in the nearby galaxy M101 on August 24th has leveled off at magnitude 10.0 — just as predicted for a Type Ia supernova at M101's distance. See up-to-date light curve from the beginning. Judge its brightness yourself using the comparison-star charts you can generate courtesy of the American Association of Variable Star Observers (AAVSO). (Enter star name SN 2011fe) .

This is the brightest supernova that's been visible from mid-northern latitudes in decades. It's well within visual reach in a 3- or 4-inch scope. You'll be using the supernova to find the galaxy, not the other way around — especially with the moonlight in the sky this week. The galaxy (off the handle of the Big Dipper) is diffuse and easily wiped out by skyglow. And it's getting lower now; look right after dark. A window of moonless observing time starts opening up again right after dark on September 16th or 17th. See our article, Supernova Erupts in M101. 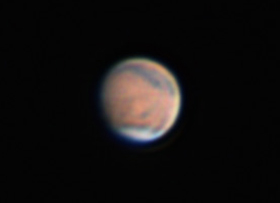 South is up; note the north polar cloud hood at bottom. The brighter, sharper North Polar Cap should be emerging into view as the cloud hood retreats in coming weeks. The large, darkest diagonal mark near top is Mare Cimmerium. Near the center of the disk, bright Elysium is surrounded by dark features

Mercury, bright at about magnitude –1.0, is dropping down from a good dawn apparition. Look for it low in the east about 45 minutes before sunrise. It's far below or lower left of Mars, Castor, and Pollux. Mercury passed fainter Regulus on Friday morning the 9th; look now for Regulus rapidly moving off to Mercury's upper right. Binoculars help.

To find your local time of sunrise, you can use our online almanac for your location. If you're on daylight saving time make sure the Daylight Saving Time box is checked.

Venus is hidden deep in the glow of sunset.

Mars (magnitude +1.4, crossing Gemini) rises around 2 a.m. daylight saving time. By the beginning of dawn it's in good view well up in the east, to the lower right of Castor and Pollux. Farther right of Mars is Procyon. Much farther lower right of Procyon shines bright Sirius. In a telescope, Mars is a tiny blob only 4.8 arcseconds wide. 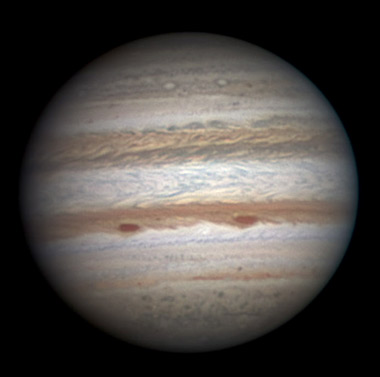 On a side of Jupiter away from the Great Red Spot, two large dark-red ovals inhabit the north edge of the North Equatorial Belt. Christopher Go took this image on September 13th at 18:06 UT, when the System II longitude on the central meridian was 246°. South is up.

Jupiter (magnitude –2.7, in southern Aries) rises in the east-northeast around 9 p.m. daylight saving time, not long after dark. Look above it for the stars of Aries and (once Jupiter is well up) closer below it for the head of Cetus, rather dim. Jupiter shines highest in the south in the hours before dawn, making this the best time to examine it with a telescope. It's 46 arcseconds wide.

Saturn (magnitude +0.9) is disappearing for the season. Use binoculars to search for it low above the western horizon in bright twilight after sunset. It's far below Arcturus and perhaps a bit left. Left of Saturn by 9° twinkles Spica.

Uranus (magnitude 5.7, in Pisces) and Neptune (magnitude 7.8, in Aquarius) are well placed in the south and southeast by late evening. Use our printable finder chart for both.

NEW BOOK: Sue French's DEEP-SKY WONDERS! This big, long-awaited observing guide by Sky & Telescope's own Sue French is now available for pre-order from Shop at Sky. This lavishly illustrated book contains Sue’s 100 favorite sky tours (25 per season), with finder charts, from her 11 years of writing the Celestial Sampler and Deep-Sky Wonders columns for S&T. Pre-order now and your book will ship on September 26th. Don’t miss it.