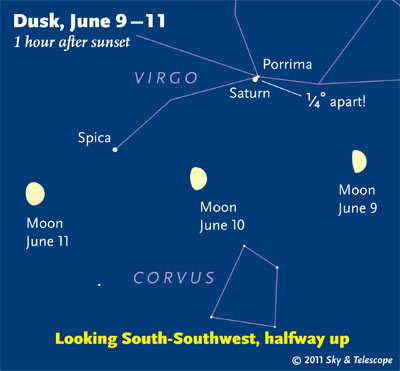 Watch the thickening Moon march through the gap between Virgo and Corvus night to night. 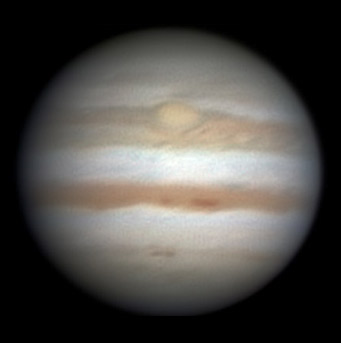 Venus (magnitude –3.8) shines barely above the east-northeast horizon as dawn grows bright. Look for it 20 or 30 minutes before sunrise.

Mars (dim at magnitude +1.3) is low in the dawn very far to the lower left of Jupiter, but not as far as Venus. Try with binoculars.

Jupiter (magnitude –2.2, at the Aries-Pisces border) shines in the east during dawn.

Saturn (magnitude +0.8, in Virgo) is in fine view in the south to southwest after dusk. And just ¼° to its upper right is fainter Porrima (Gamma Virginis), turning Saturn into a naked-eye "double star." Shining 15° to Saturn's left is Spica.

In a telescope Saturn's rings are 7.3° from edge on, their minimum tilt for more than a decade to come. The rings are casting a relatively wide, prominent black shadow southward onto the globe, and the globe's shadow on the rings is visible just off the globe's celestial east (following) side. The North Equatorial Belt is a dusky band. North of it, Saturn's seven-months-old white outbreak is still active, as shown here; read more about this huge storm as studied from the Cassini Saturn orbiter and the Very Large Telescope in Chile. 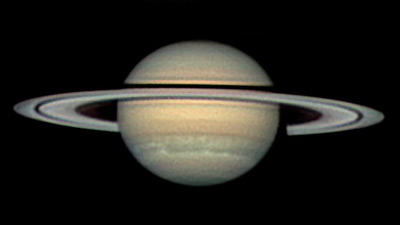 Uranus (magnitude 5.9, in western Pisces) is low in the east-southeast before the first light of dawn.

Pluto (magnitude 14 in Sagittarius) is highest during early-morning hours. A big finder chart for it is in the July Sky & Telescope, page 64.