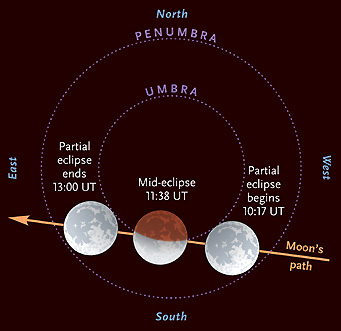 The northern half of the Moon skims through Earthâ€™s umbra (dark shadow core) on Saturday morning, June 26th. Less noticeable will be the first and last stages of the eclipse, when the Moon is in the penumbra, the shadowâ€™s pale outer fringe. See article.

Venus (magnitude –4.0, moving from Cancer into Leo) is the bright Evening Star sinking low in the west as twilight fades. In a telescope Venus is still a small (15-arcsecond) gibbous disk. You'll have the cleanest telescopic views of it when it's higher in the blue sky of afternoon — if you can find it then. Not until late summer will Venus assume its larger and more dramatic crescent phase.

Mars (magnitude +1.3, in Leo) shines in the west after dusk to the upper left of Venus. Between Mars and Venus is Regulus, equal to Mars in brightness. In a telescope Mars is just a very tiny blob, 5.3 arcseconds in diameter. 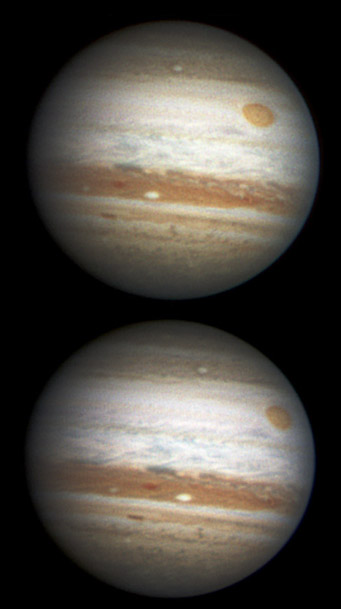 Jupiter's Great Red Spot is still floating free in the absence of the South Equatorial Belt. Christopher Go took the bottom image at 20:32 UT June 25th, and the top image 24 minutes later. South is up.

Jupiter (magnitude –2.4, in Pisces) rises around midnight or 1 a.m. daylight saving time and shines high in the southeast before dawn. It's the brightest starlike point in the morning sky. See our article on Jupiter's disappearing South Equatorial Belt.

Saturn (magnitude +1.1, in the head of Virgo) is in the west-southwest during evening, to the upper left of Mars. The diagonal line of Saturn, Mars, Regulus, and Venus is shrinking; the three planets will bunch up low in the sunset in early August. A telescope shows Saturn's rings a mere 2° from edge-on.

Uranus (magnitude 5.8, in Pisces) is about 2° from Jupiter. In a telescope Uranus is only 3.6 arcseconds wide compared to Jupiter's 41″.

Neptune (magnitude 7.9, at the Aquarius-Capricornus border) is in good view during early morning hours well to Jupiter's west. See our finder charts for Uranus and Neptune in 2010.

Pluto (magnitude 14, in northwestern Sagittarius) is high in the south-southeast by 11 or midnight. See our big Pluto finder charts for 2010. 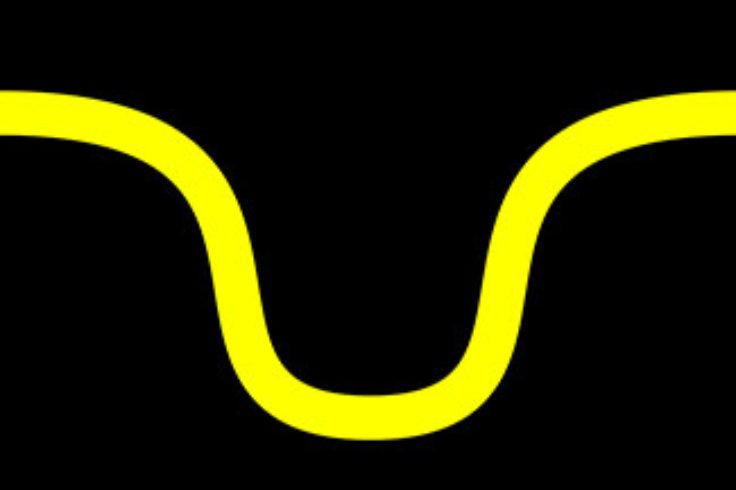 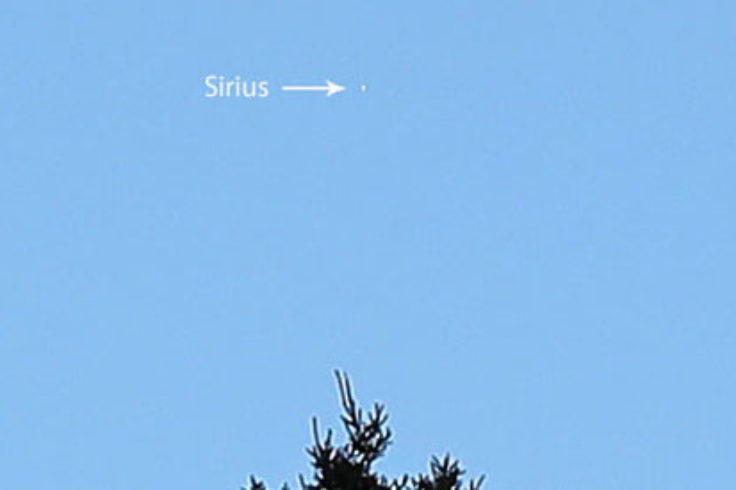 How to See Sirius in the Daytime