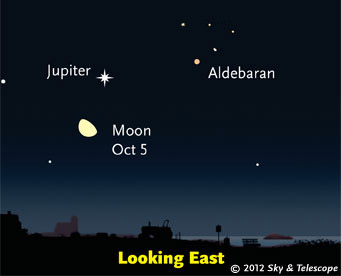 The waning Moon is up below Jupiter by 11 p.m. on Friday the 5th. 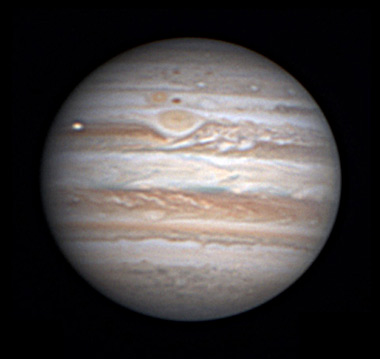 Jupiter's Great Red Spot had just crossed the planet's central meridian when Jim Phillips in South Carolina took this image on October 7th. South is up. Red Spot Junior (Oval BA), with a small very dark spot just behind it, has finished passing south of the Great Red Spot with no apparent effect on any of them. Below center, the North Tropical Zone has rebrightened to once again separate the tan North Equatorial Belt from the North Temperate Belt. The bright point is Io.

Mercury is buried deep in the sunset.

Venus (magnitude –4.1, in Leo) rises in darkness around 4 a.m. daylight saving time (depending on where you live), coming above the eastern horizon almost two hours before the first glimmer of dawn. By dawn it's shining brightly high in the east.

Look above or upper right of Venus for Regulus, much fainter. Regulus pulls farther away from it every day.

Mars (magnitude +1.2, in Libra) remains low in the southwest in evening twilight. Don't confuse it with twinklier orange Antares ("Anti-Mars") to its left. The gap between them shrinks from 11° to 7° this week. They're nearly the same brightness.

Jupiter (magnitude –2.6, in Taurus) rises in the east-northeast around 9 or 10 p.m. daylight saving time. Once it's clear of the horizon, look for fainter orange Aldebaran twinkling 8° to its right and Beta Tauri (Elnath) a similar distance to Jupiter's left. By dawn this lineup-of-three stands high and almost vertical in the southwest.

Uranus (magnitude 5.7, at the Pisces-Cetus border) and Neptune (magnitude 7.8, in Aquarius) are in the southeast to south during evening. Finder charts for Uranus and Neptune. 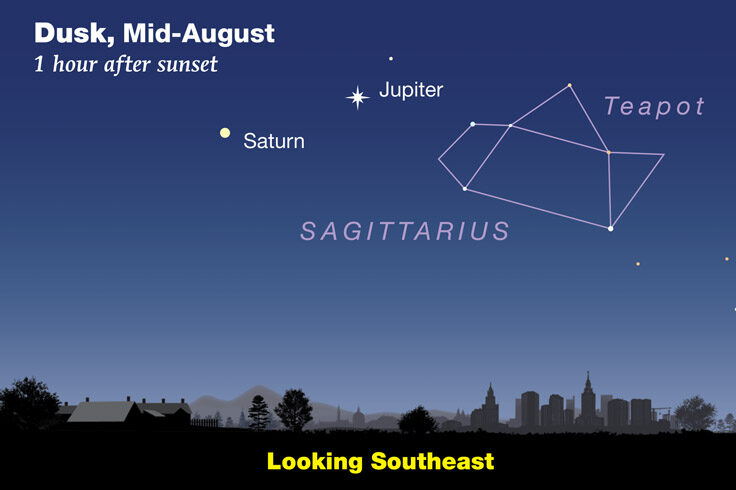