Some daily events in the changing sky for April 27 – May 5. 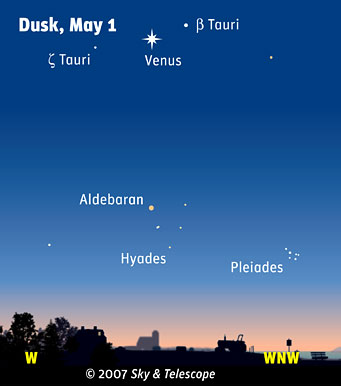 Watch Venus pass between Beta and Zeta Tauri, the horns of Taurus, in the western sky at dusk this week.

Try looking with binoculars or a telescope about 75 minutes before sunrise, depending on the clarity of the air. To find your local sunrise time, make sure you've put your location and current time zone into our online almanac. 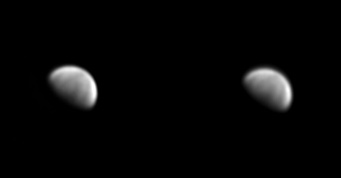 The clouds of Venus are essentially featureless to the eye, but they get more interesting in the ultraviolet. Sky & Telescope's Sean Walker took these stacked video images with a 12.5-inch reflector in excellent seeing before sunset on April 20, 2007. "Here are my two best results," he writes, taken 28 minutes apart. "I picked up a fused silica lens that I fashioned into a barlow — it has excellent UV transmission, though I still needed to add my Astro-Physics Barcon to achieve an acceptable image scale. Still, both together allowed a bright image at 98 frames per second."

Venus (magnitude –4.1, in Taurus) is the brilliant "Evening Star" in the west during and after twilight. A few degrees to Venus's right, watch the not-quite-first-magnitude star Beta Tauri moving downward day by day.

Mars (magnitude +1.0, in Aquarius) still remains low in the east-southeast during dawn.

Jupiter (magnitude –2.5, in southern Ophiuchus) rises around 11 p.m. daylight saving time and dominates the south before dawn. Antares, less bright, sparkles 10° to Jupiter's upper right when they rise, and to its lower right by daybreak. There's a lot doing on Jupiter this season; see article. The clearest telescopic views are before and during dawn, when Jupiter is highest. 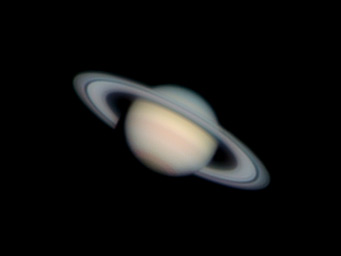 Spica (left) and the constellation Corvus (right) shine below the Moon on the evening of April 28th.

Saturn (magnitude +0.4, at the Leo-Cancer border) shines high in the southwest during evening. Regulus, less bright at magnitude +1.4, is 12° to its left or upper left. North of Regulus is 2.3-magnitude Algieba (Gamma Leonis), a fine telescopic double star.

Uranus (magnitude 6, in Aquarius) is very low in the east-southeast before dawn, in the background of Mars.

Neptune (magnitude 8, in Capricornus) low in the southeast before dawn.

Pluto (magnitude 14, in northwestern Sagittarius) is not far from Jupiter in the south before dawn.