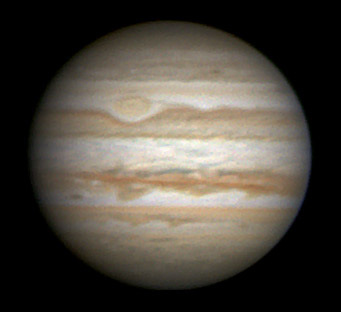 Jupiter's Great Red Spot (GRS) is pale this year, and the South Equatorial Belt, which the Red Spot sits in, looks pretty quiet. But the North Equatorial Belt (NEB, below center) is going nuts! In the parts of the NEB north of the Great Red Spot, the prominent white swirls of three weeks ago have morphed into dark chaos. Also note the very long, straight, diagonal red-brown line crossing the NEB.

Mercury (about magnitude 0) is having a poor apparition deep in the glow of dawn. Look for it in morning twilight about 23° lower left of Venus. Binoculars will help.

Venus and Mars (magnitudes –4.4 and +1.1, respectively) remain together due east during dawn. Venus is a dazzler; Mars is 150 times fainter. Look for Mars to Venus's left or upper left by only 3° or 2° this week, hardly more than a finger's width at arm's length. They're in conjunction, 2.0° apart, on the morning of June 22nd.

Four reasons combine to create their great disparity in brightness. Mars is farther from the Sun so it's illuminated less brightly than Venus, Mars is a smaller planet, its surface is darker and less reflective than Venus's white clouds, and it's currently farther from Earth.

Jupiter (magnitude –2.5, in Capricornus) now rises before midnight and shines brightly in the south by dawn. The sharpest telescopic glimpses may come during morning twilight, when the atmospheric seeing sometimes turns very steady. 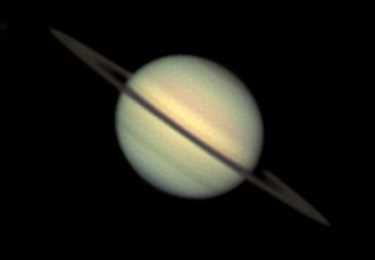 Saturn (magnitude +1.0, in Leo) is in the southwest at dusk and sinks lower in the west as the evening advances. In a telescope Saturn's rings are beginning to narrow again, appearing only about 3.5° from edge on. And see how they're dimming! The caption at right tells why.

Uranus (magnitude 5.9, in Pisces) is between Venus and Jupiter before dawn.

Neptune (magnitude 7.9, in Capricornus) appears only 3/4° from Jupiter, but it's 15,000 times fainter. See our finder charts for Uranus and Neptune.

Pluto (14th magnitude, in northwestern Sagittarius) is highest in the south around 1 a.m. See the finder chart in the June Sky & Telescope, page 53.