Some daily events in the changing sky for October 12 – 20.

Comet LONEOS. A nice little comet is currently visible in binoculars very low in the west at the end of twilight. Comet LONEOS, C/2007 F1, is below Arcturus at dusk, currently 6th magnitude and brightening toward a possible 4th magnitude at October's end. It's heading southeast (leftward above the dusk horizon as seen from mid-northern latitudes) day by day. Telescopes show it with a pale gray-green head and a long, thin gas tail. Finder map and ephemeris, courtesy Spaceweather.com. 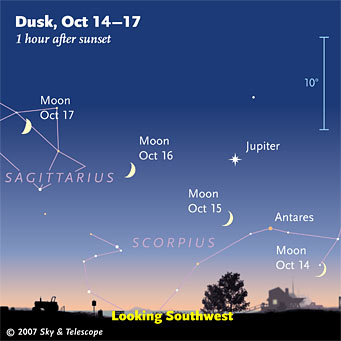 Watch the waxing crescent Moon pass Antares and Jupiter low in the southwest after sunset this week. (These scenes are drawn for the middle of North America. European observers: move each Moon symbol a quarter of the way toward the one for the previous date. The blue 10° scale is about the size of your fist held at arm's length. For clarity, the Moon is shown three times actual size.) 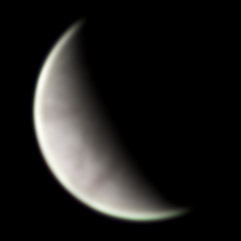 Venus continues to climb higher in the morning sky. Sean Walker made this image from red, green, blue, and ultraviolet video stacks on the morning of October 5th.

Mercury is lost deep in the glow of sunset.

Venus (magnitude –4.7, in Leo) blazes high in the east before and during dawn. Near it are much fainter Saturn and Regulus. A telescope shows that Venus is a thick crescent, thickening from week to week even as the planet shrinks into the distance.

Mars (magnitude –0.3, in the feet of Gemini) rises around 10:30 p.m. daylight saving time and shines very high toward the south before and during dawn — near the zenith, in fact, for mid-northern observers. Compare Mars's fiery color with that of Betelgeuse, which is off to its right after they rise and below it in early dawn.

In a telescope, Mars appears 10.5 to 11 arcseconds in diameter this week. It will reach 16" diameter around its Christmas-season opposition. The Martian dust storms of July and August have abated, and while the planet's atmosphere is still bright and hazy with dust, surface features are showing through somewhat better. But they're still low-contrast. 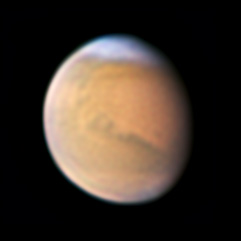 Sean Walker took this image of Mars on the morning of October 5th under near-perfect conditions. Sinus Meridiani, where the robust NASA rover Opportunity is exploring Victoria Crater, is about to transit the central meridian here. Note the big, newly regrown North Polar Hood of winter clouds at top.

Jupiter (magnitude –2.0, in southern Ophiuchus) glares in the southwest during and after twilight. It sets by midevening. Look for Antares, much less bright, sparkling redly 8° or 9° below it at nightfall, as shown at the top of this page.

Saturn (magnitude +0.7) is the brightest "star" near bright Venus in the dawn. Fainter Regulus (magnitude +1.4) is there too; it's upper right of Saturn.

Pluto (magnitude 14.0, in Sagittarius) is sinking low in the southwest at dusk.