Some daily events in the changing sky for November 2 – 10.

Weird Comet Holmes is still an easy naked-eye sight. The comet has enlarged from a "star" to a fuzzpatch without losing any of its brightness. It's easy to find in Perseus in the evening sky. This is an extraordinary event not to miss! See our finder charts, full story, and reader photos. 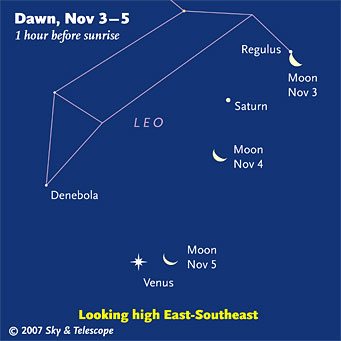 Watch the dawn Moon pass Regulus, Saturn, and Venus from one morning to the next. (These scenes are drawn for the middle of North America. European observers: move each Moon symbol a quarter of the way toward the one for the previous date. For clarity, the Moon is shown three times actual size.)

Mars (magnitude –0.7, in Gemini) now rises as early as 9 p.m. daylight saving time. It shines very high toward the south before dawn — near the zenith, in fact, for mid-northern observers.

In a telescope, Mars appears 12 or 13 arcseconds in diameter. It will reach 15.9" diameter around its Christmas-season opposition. The Martian dust storms of July and August have abated, and while the planet's atmosphere is still bright and hazy with dust, surface features are showing through better. But they're still low-contrast.

Jupiter (magnitude –1.9, in southern Ophiuchus) is sinking low in the southwest in twilight. It sets soon after dark.

Saturn (magnitude +0.8) rises well after midnight and is very high to Venus's upper right before and during dawn. Fainter Regulus (magnitude +1.4) is 7° upper right of Saturn.

Uranus, as imaged at high power on August 28th with a 12.5-inch reflector using the stacked-video technique. Visually Uranus appears nowhere near this colorful: pale gray with only a hint of green-blue.

All descriptions that relate to your horizon or zenith — including the words up, down, right, and left — are written for the world's midnorthern latitudes. Descriptions that also depend on longitude (mainly Moon positions) are for North America. Eastern Daylight Time (EDT) equals Universal Time (UT, UTC, or GMT) minus 4 hours. Eastern Standard Time (EST) is UT minus 5 hours.