Mercury (about magnitude 0) begins the week nicely visible to the lower right of bright Venus, low in the southwest during twilight. Mercury becomes a little tougher each day, fading and sinking farther away to Venus's lower right.

Venus (magnitude –3.9) is creeping higher into better view in the southwest during twilight. It's on its way up for a grand, high apparition as the "Evening Star" during and after twilight all this winter (for the Northern Hemisphere).

Mars (magnitude +0.9, in Leo) rises around midnight. By the beginning of dawn it's high in the south-southeast. It's near Regulus, which is only a little fainter at magnitude +1.3 and slightly blue-white. Mars and Regulus widen from 4° apart on the morning of November 19th to 7½° by the 26th.

In a telescope Mars is a tiny blob only about 6.7 arcseconds wide. Mars is on its way to opposition next March, when it will reach a width of 13.9 arcseconds. 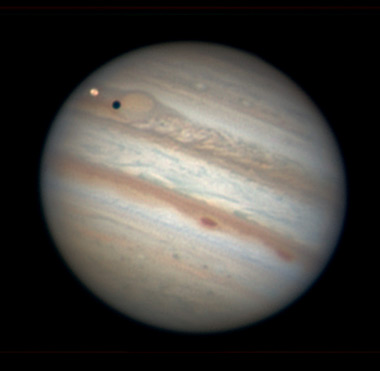 Io was casting its shadow onto Jupiter's Great Red Spot when S&T's Sean Walker took this image on the evening of November 5th. South is to the upper right. The reddish South Equatorial Belt remains wider (and bicolored) compared to the North Equatorial Belt. Walker used the same imaging setup as for Mars above.

Jupiter (magnitude –2.8, at the Aries-Pisces border) blazes high in the east at dusk and higher in the southeast to south later in the evening. In a telescope Jupiter still appears a big 48 arcseconds wide. See our guide to observing Jupiter with a telescope.

Saturn (magnitude +0.8) is low in the east-southeast as dawn begins, a little higher every morning. Spot sparkly Spica (magnitude +1.0) 4½° to its right. Brighter Arcturus shines far to their left or upper left.