Some daily events in the changing sky for February 29 – March 8. 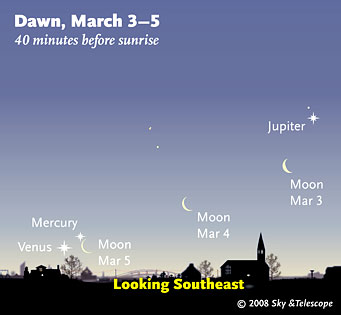 If you're up early, look low in the brightening dawn for every significant object in the solar system that's currently closer to the Sun than Earth is. Plus Jupiter. (These scenes are drawn for the middle of North America. Southerners will see all the objects higher. European observers: move each Moon symbol a quarter of the way toward the one for the previous date. For clarity, the Moon is shown three times actual size.)

Mercury (about magnitude +0.0) is just 2° or 3° to the upper right of brilliant Venus low before sunrise. But it's dozens of times fainter, so bring binoculars.

Venus (magnitude –3.9, in Capricornus) is getting lower every morning. Look for it above the southeast horizon about 30 minutes before sunrise, far lower left of Jupiter.

Mars (about magnitude +0.3, at the Taurus-Gemini border) shines very high in the south to southwest during evening, high over Orion. In the same binocular field of view with Mars is the star cluster M35 in Gemini. In a telescope this week, Mars dwindles from 9.1 to 8.4 arcseconds wide — pretty tiny. 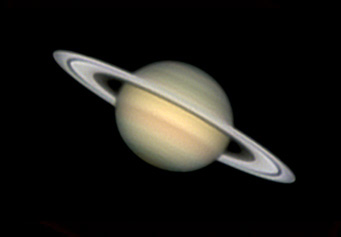 Saturn (magnitude +0.2, in Leo) was at opposition on February 23rd. It glows low in the east as twilight fades, rises higher all evening, and stands highest in the south around 11 p.m.

Fainter Regulus (magnitude +1.4) is 5° west of Saturn: to its upper right in early evening, and directly right of it later. Only a little dimmer than Regulus is Gamma (γ) Leonis (magnitude +2.1), located 8° more or less to Regulus's north. The three make an eye-catching triangle. Watch the triangle narrow in the coming weeks.

Uranus and Neptune are hidden in the glare of the Sun. (Neptune is in the vicinity of Venus and Mercury, but it's too dim to see through the bright dawn even with a telescope.)

Pluto (magnitude 14.0, in Sagittarius) is in the southeast before dawn's first light. 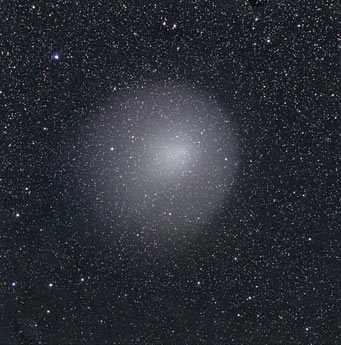 Dennis di Cicco shot this image of Comet Holmes using a Tele Vue NP127is (5-inch) refractor and Apogee Alta camera on February 11th. The field is 3° tall, with north up. "This comet is getting huge!" he writes. "So much so that I initially had a difficult time seeing it in a short exposure, because it looked like the typical 'hot spot' in the center of the frame due to optical vignetting." Click image for larger view.

Comet Holmes is passing the California Nebula this week. Both are dim but large. Think photo opportunity!

The comet itself continues to dim. On February 11th through suburban light pollution, Dennis di Cicco could not see it with the naked eye at all when he took the picture at right.

On February 24th, says Tony Flanders, "the comet was barely visible naked-eye from a modestly dark rural site. It was still pretty obvious in 15x70 binoculars, and it looked to me to be about 1° by 3/4°. I could see no sign of internal detail at all." Holmes is now shrinking slightly in apparent size as it moves farther from Earth and, also, as its outermost parts fade to invisibility.

The comet continues moving eastward in Perseus; look as soon as nightfall is complete. Chart.

All descriptions that relate to your horizon or zenith — including the words up, down, right, and left — are written for the world's mid-northern latitudes. Descriptions that also depend on longitude (mainly Moon positions) are for North America. Eastern Standard Time (EST) equals Universal Time (UT, UTC, or GMT) minus 5 hours. Eastern Daylight Time (EDT) is UT minus 4 hours. 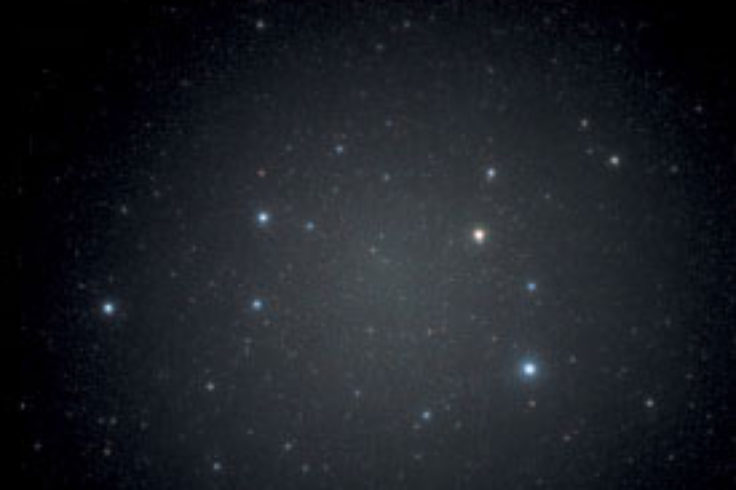