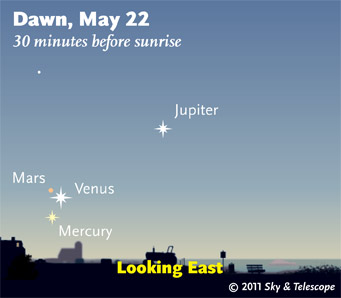 Now that Jupiter is higher and easier to see, you can use it as a guide to locating the other three dawn planets.

These scenes are always drawn for 40° north latitude. If you're south of there, the view will be rotated counterclockwise by roughly your difference from 40° latitude. (The visibility of objects in bright twilight is exaggerated.) 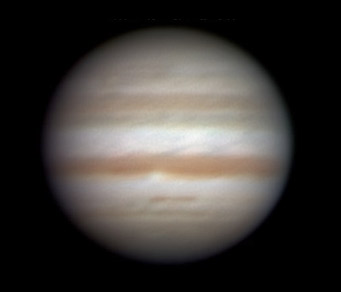 Jupiter is still too low in early dawn for sharp telescopic viewing, but Christopher Go obtained this image anyway on May 19th. It shows that Jupiter's dark South Equatorial Belt (above center) has returned and is now wide and bicolored, and that the North Equatorial Belt remains very prominently dark red-brown. Note the white oval in the north edge of the NEB, and long, narrow dark barge a little farther north. South is up.

Mercury, Venus, Mars, and Jupiter continue their evolutions low in the dawn, but now they're drawing farther apart. Use binoculars about 30 minutes before sunrise; look low in the east. Jupiter is the highest. Look lower left of it for Venus. Near Venus, binoculars should show Mercury (below or lower left of Venus) and perhaps faint little Mars (left of or above Venus).

See our article "The Four-Planet Dance of 2011" about this dawn parade, with daily panels in an animation. You can pause the animation at the date of your choice.

Saturn (magnitude +0.6, in Virgo) is now in excellent evening view high in the south. Just ½° to its right is fainter Porrima (Gamma Virginis), turning Saturn into a naked-eye "double star." Shining 14° to Saturn's lower left is Spica. 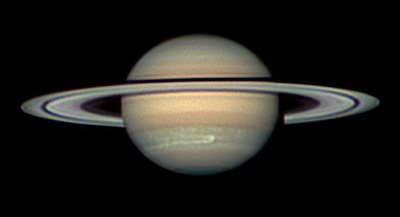 Saturn's white spot continues re-erupting! The head of the pale streamer wrapping around the planet has rebrightened with new upwelling material, as seen in this image taken by Christopher Go on May 12th (at 13:32 UT; System III central-meridian longitude 314Â°). "The old and new materials are interacting, forming bright and complex features," he writes. South here is up.

Also see his gif animation or wmv animation of several more images taken over the course of 84 minutes, confirming dark spoke markings on the celestial east (following) side of the bright B ring. In the animations, north is up.

In a telescope Saturn's rings are 7.3° from edge on, their minimum tilt for more than a decade to come. The rings are casting a relatively wide, prominent black shadow southward onto the globe, and the globe's shadow on the rings is visible just off the globe's celestial east (following) side, as seen in the image here. On the globe itself, Saturn's six-months-old white outbreak remains very active. Read Dissecting Saturn's Big Storm for in-depth results (literally) from the Cassini Saturn orbiter and the Very Large Telescope in Chile.

And don't skip over Porrima. It's a fine, close telescopic binary star with a current separation of 1.7 arcseconds. Use high power and hope for good seeing. See the article in the April Sky & Telescope, page 56.

Uranus (magnitude 5.9, in western Pisces) is very low in the east before the first light of dawn.

Pluto (magnitude 14.0 in Sagittarius, and back here by popular request) is highest in the south before dawn. A finder chart for it, running from June 1st through the end of Pluto's observing season, will appear in the July Sky & Telescope, page 64.