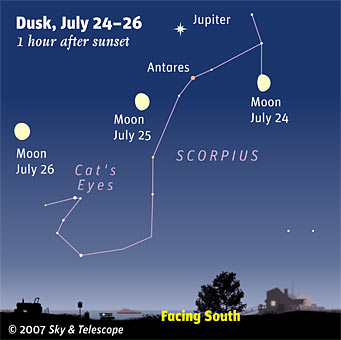 Watch the bright Moon pass Jupiter and Scorpius around midweek. (These scenes are drawn for the middle of North America. European observers: move each Moon symbol a quarter of the way toward the one for the previous date. For clarity, the Moon is shown three times actual size.)

Venus is bright at magnitude –4.6, but it's getting quite low in the west after sunset. A telescope — or even steadily mounted binoculars — shows Venus to be a thinning crescent.

Mars (magnitude +0.6, between Aries and Taurus) rises after about 1 a.m. daylight saving time is and high in the east by dawn. Look for the Pleiades to its left or lower left, and Mars-like Aldebaran below the Pleiades. In a telescope, Mars is only 7 arcseconds in diameter. It's on its way to opposition this coming Christmas season, when it will reach 16 arcseconds wide.

Jupiter (magnitude –2.5, in southern Ophiuchus) glares in the south in early evening and lower in the southwest later at night. Antares, less bright, sparkles redly 5° below it; the two are evening companions all this summer. Other stars of Scorpius shine below them and to their right.

Saturn is about 9° to the right of Venus and is getting lost in the glow of sunset. So is Regulus, between the two planets and somewhat above. Use binoculars.

Pluto (magnitude 13.9, in the northwestern corner of Sagittarius) is highest in early evening, about 17° east of Jupiter. Finder charts for Uranus, Neptune, and Pluto are in the July Sky & Telescope, page 60.