Some daily events in the changing sky for July 27 – August 4. 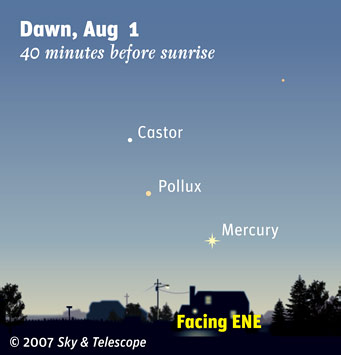 Get up early this week before dawn gets too bright, and you can find Mercury shining above the east-northeast horizon.

Venus (magnitude –4.3) is fast disappearing into the glare of sunset.

Mars (magnitude +0.5, in Taurus) rises around 1 a.m. daylight saving time is and high in the east by dawn. Look for the Pleiades to its left, and Mars-like Aldebaran below the Pleiades.

In a telescope Mars is currently only 7 arcseconds in diameter, but it's on its way to a Christmas-season opposition, when it will grow to nearly 16 arcseconds wide in the evening sky. This will be a far cry from the 25

th it displayed at its record-breaking close approach in 2003 — but it'll be the largest Mars will appear again until the opposition of 2016!

Incidentally, if friends or family tell you they hear that Mars will become as big and bright as the full Moon in the next few weeks, be nice to them. Read our article about the regular-as-clockwork August Mars Hoax, so that you can tell them the whole story. (My comment about immunization is optional.) 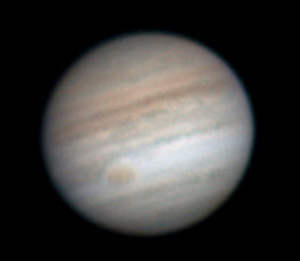 Jupiter is receding a bit farther into the distance, so detail on it is getting harder to see and image. Click the picture for a series of three views showing the planet's face changing due to rotation in less than three hours.

Jupiter (magnitude –2.5, in southern Ophiuchus) glares in the south during twilight and lower in the southwest later after dark. Antares, less bright, sparkles redly 5° below it; the two are evening companions all summer. Other stars of Scorpius shine below them and to their right.

Uranus (magnitude 5.8, in Aquarius) and Neptune (magnitude 7.8, in Capricornus) are well up in the south during early morning hours.

Pluto (magnitude 13.9, in the northwestern corner of Sagittarius) is highest right after dark, 18° east-northeast of Jupiter. Finder charts for Uranus, Neptune, and Pluto are in the July Sky & Telescope, page 60.