Some daily events in the changing sky for December 12 – 20. 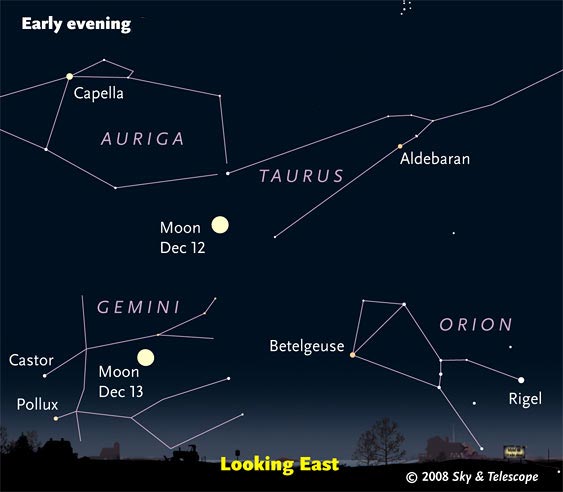 The unusually big bright Moon shines among bright constellations in the east for the next couple of days, then departs to leave the winter stars to shine by themselves in early evening. (These scenes are drawn for the middle of North America. European observers: move each Moon symbol a quarter of the way toward the one for the previous date. In the Far East, move it halfway.) 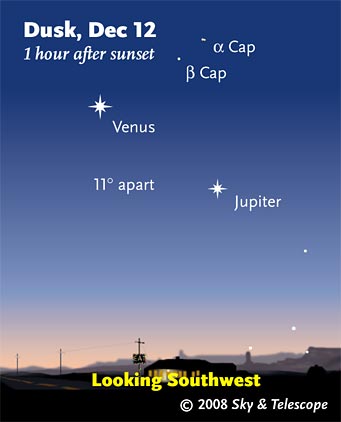 Watch Venus and Jupiter pulling farther apart in the southwest at dusk for the rest of December. The gap is between them is widening by about 1° per day.

Venus and Jupiter (magnitudes –4.2 and –2.0 respectively), continue pulling apart after their December 1st conjunction. The gap between them widens by 1° per day. Look southwest during twilight. Jupiter, to the lower right of dazzling Venus, is starting to get pretty low.

In a telescope Venus is small (18 arcseconds wide) and gibbous (65% illuminated). Jupiter is 33″ wide, but it has a much lower surface brightness; being 7 times farther from the Sun, Jupiter is lit only about 1/49 as brightly.

Saturn (magnitude +1.0, near the Leo-Virgo border) rises around 11 or midnight and shines high in the south by dawn. Don't confuse Saturn with similarly-bright Regulus 22° (about two fist-widths at arm's length) to its upper right after they rise, and directly to its right at dawn. 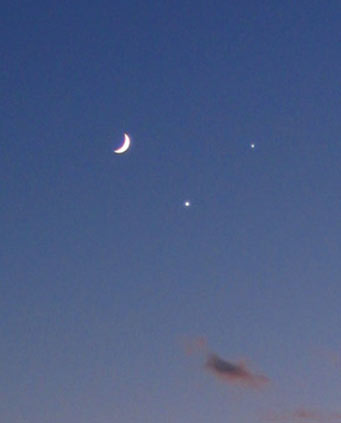 Sad conjunction is sad. Hours later, by the time of twilight in North America on December 1st, the crescent Moon had moved over to the other side of Venus and Jupiter, creating a frowny face. (Tilt your head around to see it.) Sky & Telescope's Sean Walker took this shot from New Hampshire. In the time between, the Moon crossed right over Venus for western Europe. See our photo gallery.

A telescope will show that Saturn's rings have closed to only 1° from edge on. They'll reach a minimum of 0.8° at the end of December, then start opening again before finally closing to exactly edge-on next September — when Saturn will, unfortunately, be in conjunction with the Sun.

Uranus and Neptune (magnitudes 5.8 and 7.9, respectively, in Aquarius and Capricornus) are in the southwest and south right after dark. Use our article and finder charts or the chart in the September Sky & Telescope, page 63. 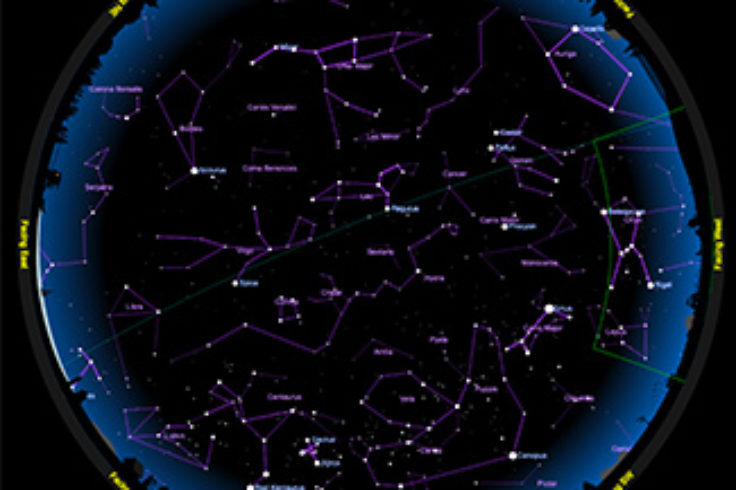